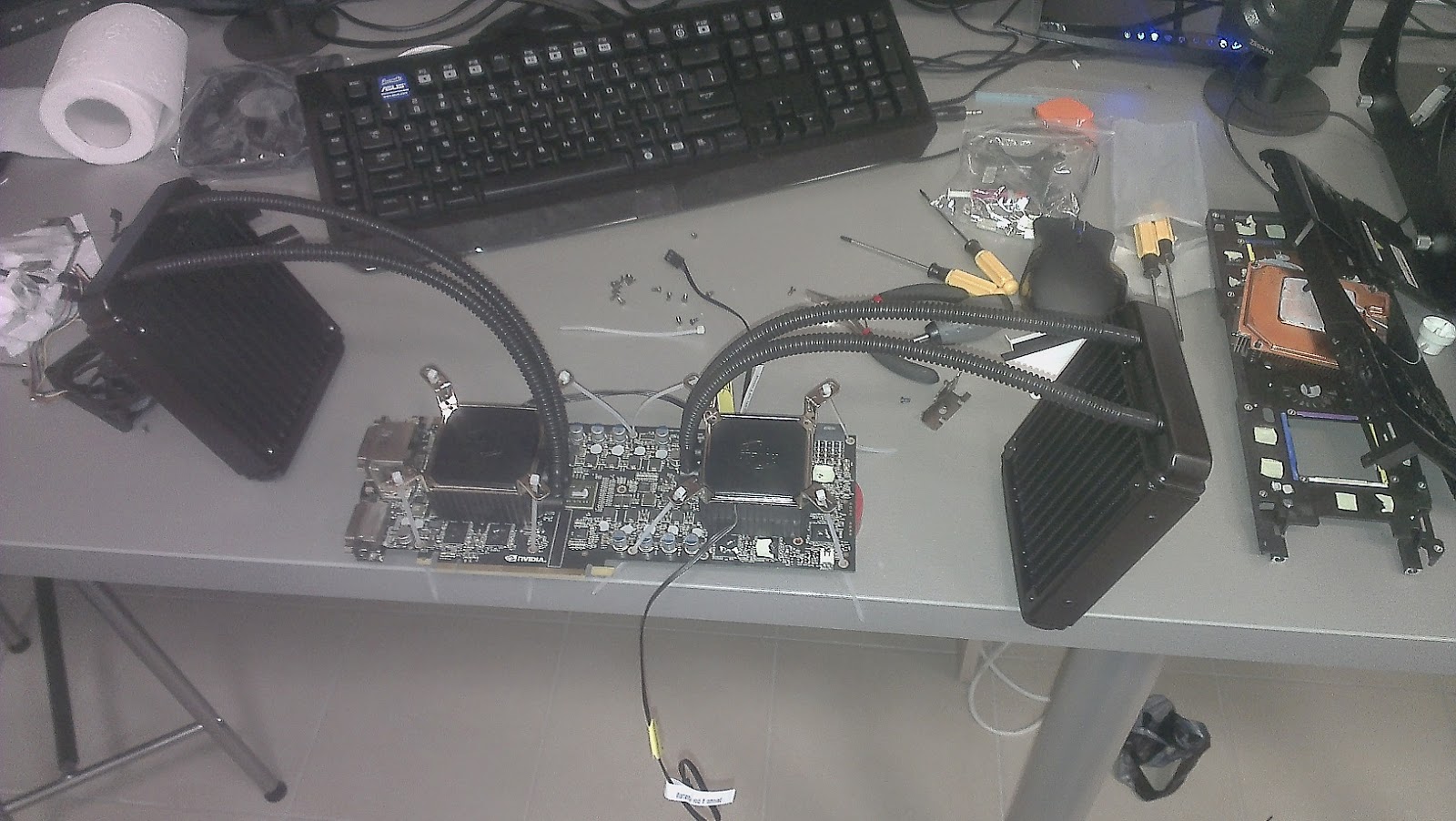 On my first mounting attempt I managed to bend the PCB by tightening the zipties too much. Luckily I just had to redo the mounting. The end result of this is that the GPU takes up ALL expansion slots bellow it. I do believe that you could do the mounting slightly different and reduce the number of occupied slots to just 5 but for my purposes of running the card on a test bench this mounting proved most effective. Another thing that isn't necessary is removing the PCI-e slot bracket because you can have that attached by the DVI ports without having it take up screw hole #1. However even with the PCI-e bracket this is definitely not something you would want sitting in your tower case but it is great for open air test benches and it manages to run the card at 51C at stock clocks which is a 34C improvement over the stock cooler. The other good thing about this cooling method is that you still have enough space to attach addon VRMs like the EVGA E-power.
Posted by Buildzoid at 9:26 AM No comments:

So in my revival update I wrote that I started dabbling in crypto currencies. I've decided that  will not be posting crypto currency content on this blog. You will instead find it here.

I will also be making a gaming blog and this blog is going to become only hardware specific.
I would also appreciate if people commented what they like and dislike about my articles in terms of content and writing because that lets me improve.

I will be releasing my next hardware post on the weekend. This time I will be covering a motherboard since that allows me build the framework for all future reviews.
Posted by Buildzoid at 2:28 AM No comments:

This review will not cover the FPS this card gives because every review ever made does that so you can go read their results.
I will also not give you temp and power figures because I do not have an AC and use a test bench instead of a case so my temps are lower than in a case and I do not have the equipment required to measure the power draw on the 12V rail.

Cooling Analysis:
The windforce 450W cooler uses 6 heatpipes that are connect to the core though a bit of copper that sticks out of the base of the cooler. The cooler use 3 low profile 74mm fans capable of 4500RPM at maximum speed at which point they are very very loud. The fans are angled to blow air away from the motherboard. The fin stack directly above the core has a trapezoid in the middle that forces hot air to come out of the long sides of the PCB. The memory chips dump their heat into the main fin by use of thermal pads. The VRM dumps it's heat directly into a couple of fins in the secondary fin stack. This cooling is sufficient for gaming and low voltage overclocking(up to +75mv on the core) however Furmark or high voltages will very quickly get the VRM to over 90+C even on my open air test bench. It is also possible that the VRM dumping it's heat into the secondary fin finstack and the heatpipes is lowering the coolers cooling capability. I would much rather have seen a separate VRM heatsink instead of using the core's heat sink space for cooling the VRM.
Overall this a good heatsink for the average gamer but doesn't quite cut it for high voltage (+150mv or more) overclocking. So the heat sink gets a 7/10.

I might be able to produce a guide on how to upgrade this heat sink. I plan to mess with replacing the fans and getting the VRM it's own cooler.

VRM Analysis:
-Phases: 5+1+1 phases from an IR 3567B PWM controller.
-Maximum core current out: 350A @ 125C° which is inline with the AMD reference design
-Core voltage MOSFETs: 70A made by IR
-Aux voltage MOSFET: (WILL POST IN AN UPDATE LATER)
-Mem voltage MOSFET: 70A made by IR
-Core voltage chokes: same length but wider and shorter than reference 150nH Magics that are most likely 70A capable (can't get a spec sheet for them sorry)
-Mem voltage choke: 150nH Magic same as the core


VRM Verdict:
Core: Epic current capability here a full 87% more current capability than the core so 4.5/5 for that but the inductance on the inductors is really low so that's a 3.5/5 and the phase count is mediocre at only 5 controlled and physical phases so that's a 4/7 which is not a bad score but leaves something to be desired because the reference HD7970 VRM came with 220nH chokes and the option to be upgraded to 360A and 6 phases which most manufacturers did.
Memory: 4GB of GDDR5 is power hungry so it should be no surprise that the 1 phases VRM is capable of pushing 70A to it. But like with the core VRM low phase count means a 1/3 for phase count ripple suppression, a 3.5/5 for inductance and a 3/4 for current.
Aux: It's 40% better than reference so I'll give it a 5/5 also this is not a very important VRM.

Summary: There's enough power here that it's more likely the core will die before the VRM does. Unfortunately what this VRM has in current capability it lacks in ripple suppression and accuracy. If you plan to do any extreme OCing on this VRM I recommend you add an extra 2.5V 1500µF capacitor to every single one of the tantalum caps on the back of the PCB. This VRM is definitely holding the core back but at least it won't burn up.

Tuning Ability:
I have a few issues with the new voltage controller that AMD is using and those are:
Locked memory voltage control
Automatic voltage control based on temperature that you can not turn off without BIOS flashing the card.
To OC this card I used Sapphire Trixx 4.8.2
I managed to finish the Unigine benchmark at as high as 1210/1575 using +200mv with extreme visual artifacts through out the benchmark. I run the GPU at 1100/1496 on +31mv
for gaming. With my maximum artifact free overclock being 1150/1500 on +100mv.
The memory clock is bound to the core clock by the following ratio: memory clock / core clock. This ratio is typically between 1.25 and 1.4 and requires that you find it your self.
For tuning ability I give an 8/10. 1 point off for the temperature control and 1 point off for lack of memory voltage control.
Posted by Buildzoid at 9:23 AM No comments:

The Revival of this blog

So my previous post was basically half a year ago but now I'm back again not for long unless I start getting some serious traction with my articles but if you enjoy the stuff I write then you at least get more stuff to read.

So here is what happened in those 6 months that I wasn't posting.
I got an R9 290 and R9 290X and am currently running them in CFX. (reviews and some other stuff coming)
I'm mining and speculating with crypto currencies. (more content coming)
I've started doing research into processor power consumption scaling. (will publish here)
I've got into java programming and I'm currently working on a text based pokemon like RPG. (more info coming)
I've started benching for the tech power up HWbot team. (will do more coverage of OCing)
I got a 4x4GB kit of G.skill Ripjaws X ram that I used to get to 15.41 points in Cinebench R11.5. (review coming)
I got to play with an Asrock motherboard. I really hated that. (opinion coming soon)
I got a gigabyte A88X-D3H motherboard. (review coming soon)
I killed an A10-6800K.
I OCed an Athlon II x2 370K to 5.1Ghz. (review coming)
I got an R7 260X. (review coming)
I managed to strap 2 cooler master 120V CLCs to a GTX 590 with great results. (post on this coming)
I've really gotten into Need for Speed World. (Content Coming)
I've gotten a Xigmatek Alfar case. (review coming)
I also have some secret projects I'm working on that will be coming up this blog when they are done.

And if you read through all that then you can see that I'm planning to diversify this blog a lot.
The good news is that if I space all these posts out properly you will end up with several weeks worth of my terrible grammar to read. If there is an post you would like to read soon post in the comments and I'll do it sooner. Right now the plan is that the oldest and most relevant content will be posted first.
Posted by Buildzoid at 5:19 AM No comments: