Build Quality:
The entire case is painted black with the outside painted in a "rough" finish that resist fingerprints and the inside an almost sooth finish. The front cover is plastic and has a rubberized coating which to is fingerprint resistant. The whole case is built of steel but is surprisingly light making it very easy to carry even with a full system inside. The case is very rigid for it's weight with very little flex to the side panels. The only major flaw this case has are the plastic feet that do not grip surfaces and make it very easy to slide the case around.
It also has a distinct cheap rattle to it.

Building in the case:
Was very easy. There is plenty of cable management room behind the motherboard tray and there enough and big enough cutouts to cable manage even a dual GPU system. The biggest issue occur above the mother board with the top fan mount and my massive Phanteks Heatsink (review) because the heatsink blocks access to both fan headers and fan mounts. Cable management was harder to do than in some larger cases but still much better than other similarly priced cases.

Summary:
My go to case at this price point.
Posted by Buildzoid at 11:05 AM No comments:

Anyone intrested in an el cheapo GPU water cooling guide?

This is just a question if people would be interested in a guide for how to apply my ridiculous GTX 590 cooling system to other GPUs. Firstly I will investigate into make the solution thinner and more tower case friendly(the GTX 590  version never will).

Please comment what GPUs you would like to see explained.
Posted by Buildzoid at 10:31 AM No comments: 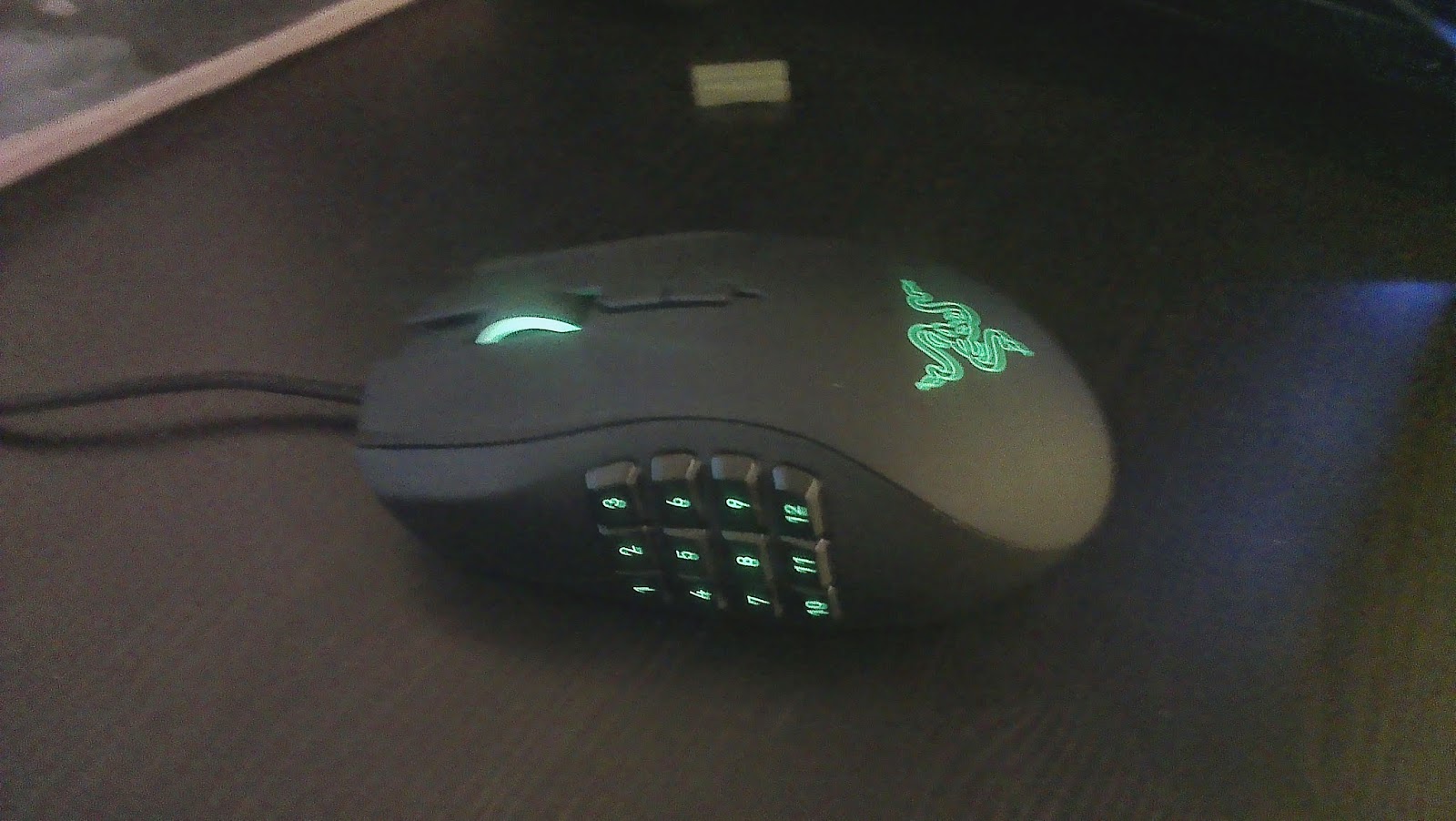 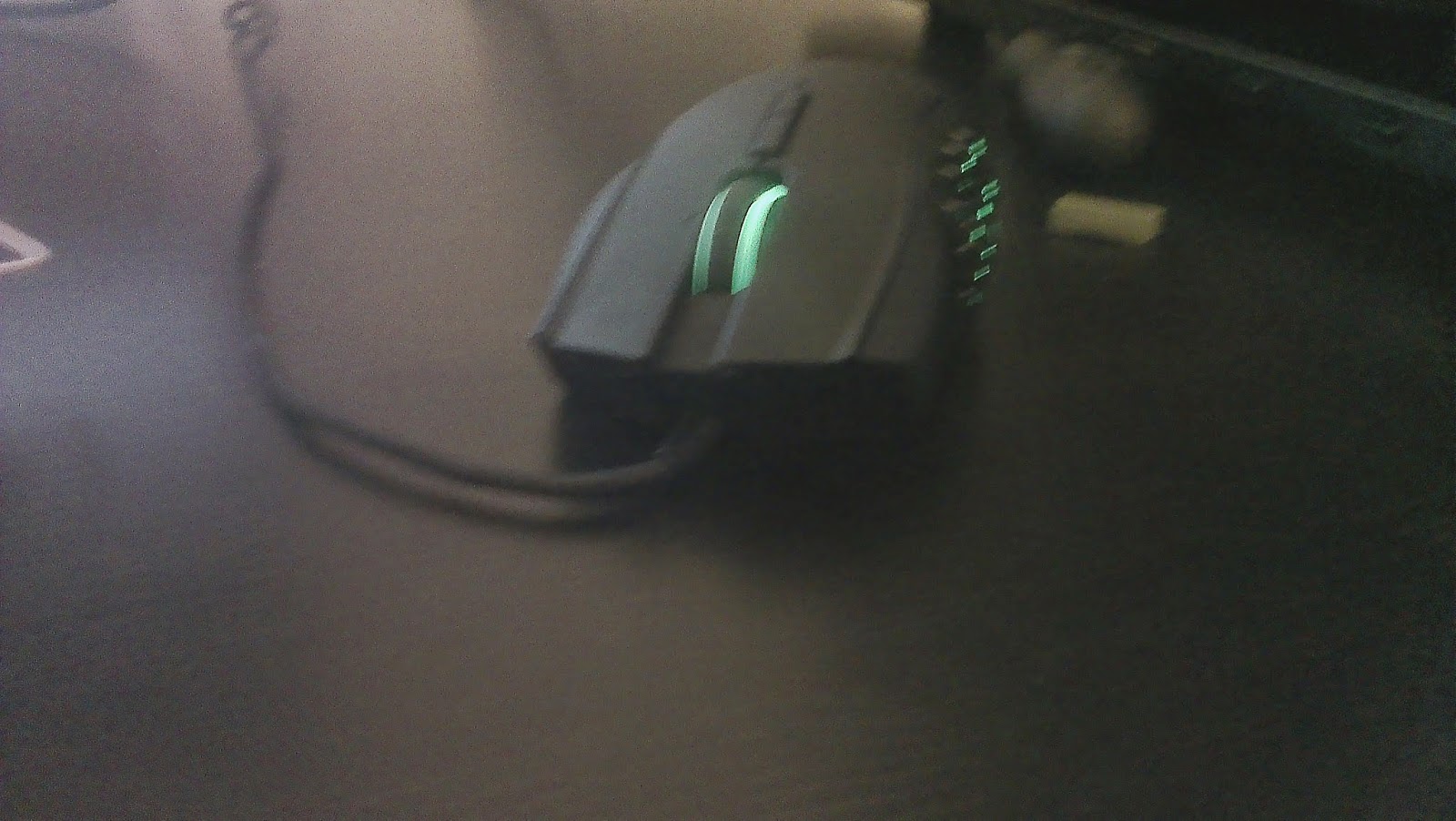 The Good
The scroll wheel and thumb-grid and Razer logo can be lit up independently.
The Razer Synapse software made it exceptionally easy to transfer
my previous Naga's profiles to the new one.
The scroll wheel now supports tilt left and right giving you 2 more buttons.
There is textured rubber on the left of the mouse making easier to hold and pick up.
The new plastic makes my hand sweat a lot less making the mouse stay clean for longer

The Neutral
The lighting of the mouse is now green instead of blue and is dimmer than on the previous naga mice.
The left click switch is faster to trigger than on the old version and takes time getting used to if you play games where using gun jumps is very dependent on accurate timing.

The Bad
I still prefer the shape of my Razer Naga Epic over the new angular shape that the 2014 edition has.
The Razer logo has only one lighting mode and that's pulsating which is annoying and not very useful.
After some extended use I have gotten used to the bulkier shape and came to like it more because I have a better grip of the mouse.

The Terrible
The new buttons.
Yes they are easier to recognize however they are too easy to press resulting in me often pressing 2 or even 4 buttons instead of the button I want.
The side buttons feel cheap compared to the older Naga mice due to being less inlaid and easier to press making them a little wobbly. Overall the mouse just feels cheaper.
The side buttons are made of smooth plastic making my thumb slide all over the place when trying to press them.

My Suggestion:
Go back to the old thumb buttons or make the new ones stiffer and rubberize them because right now they are very very bad due to being too easy to miss press.
Make a model with 16 million RGB lighting.
Add some addon weights to the mouse and heavy ones to get it close to the weight of a Naga Epic with the battery installed.

My New AMD Based System. (will change as I stabilize OCs) 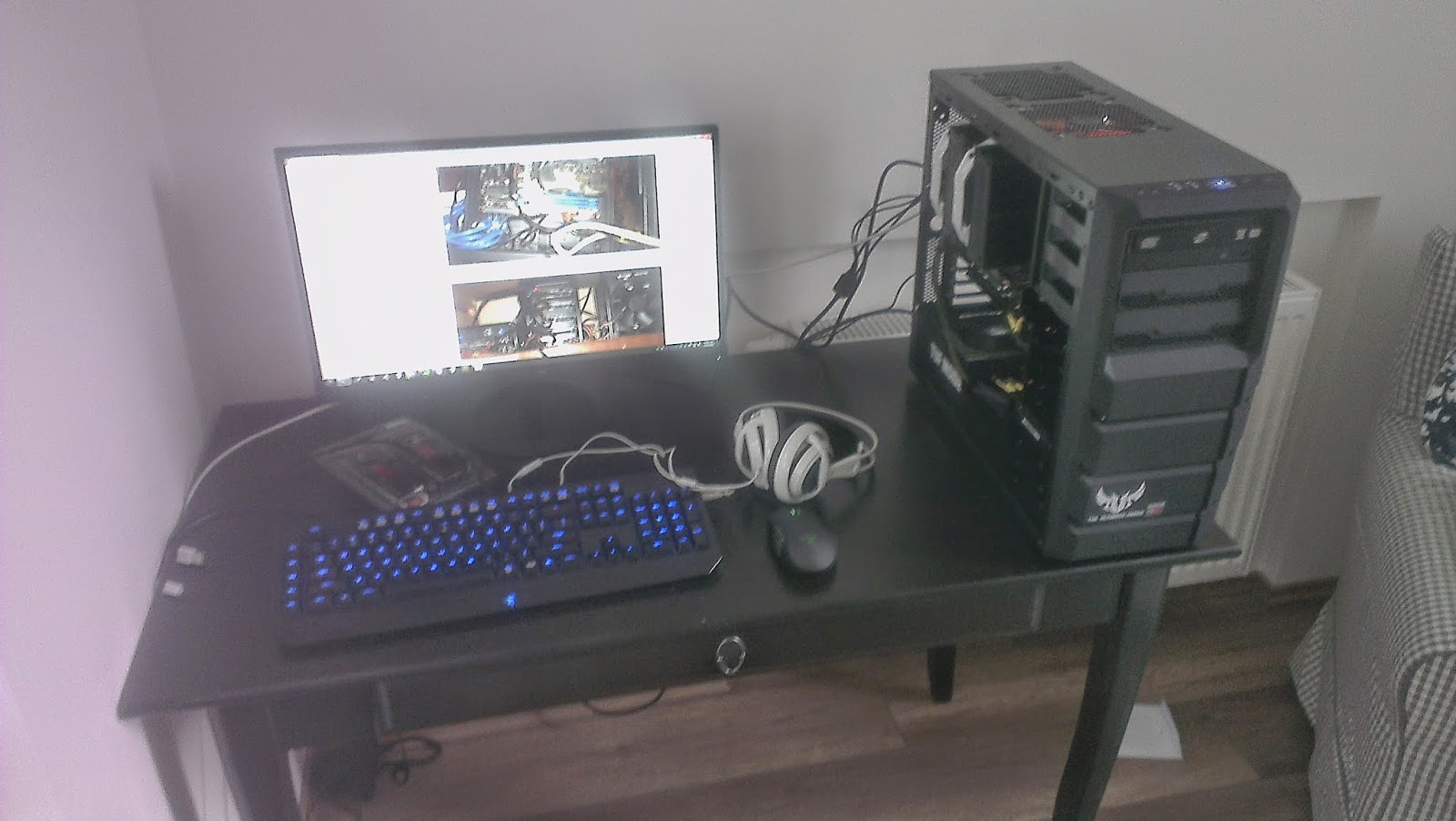 So this is the my whole setup. The Keyboard is a Razer Black Widow Ultimate 2011 with cherry blue switches. The mouse is the new Razer Naga 2014. The Monitor is an ASUS VX239 23" 1080p overclocked to 73Hz. The headphones are Steel Series Siberia V2s 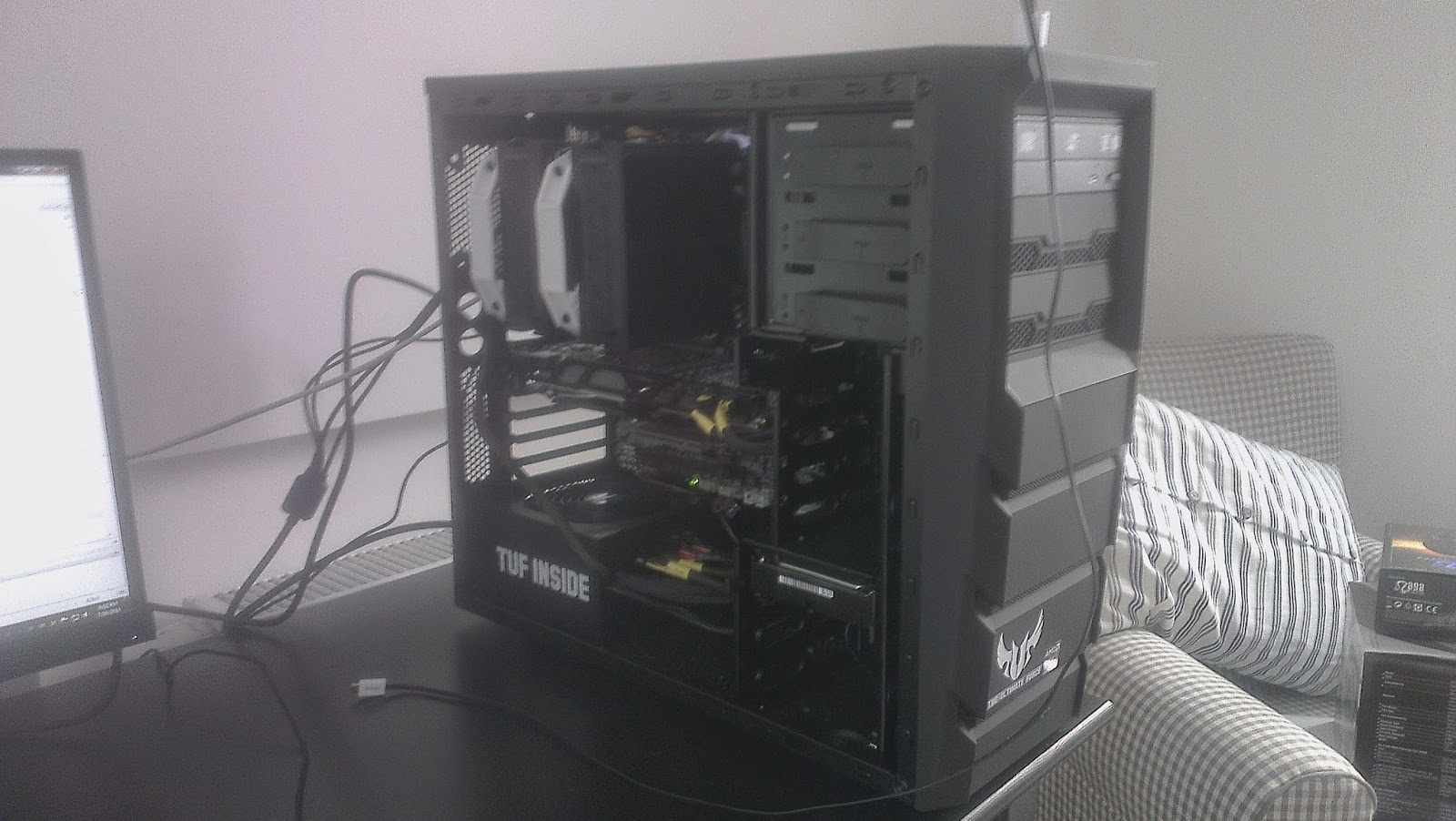 To be completely honest I think I have the worst FX 6350 in existence because I can't even get it to validate above 5.26Ghz regardless of running 1.7V through it and only running 1 core and only 1 stick of ram.

Posted by Buildzoid at 10:58 AM No comments: 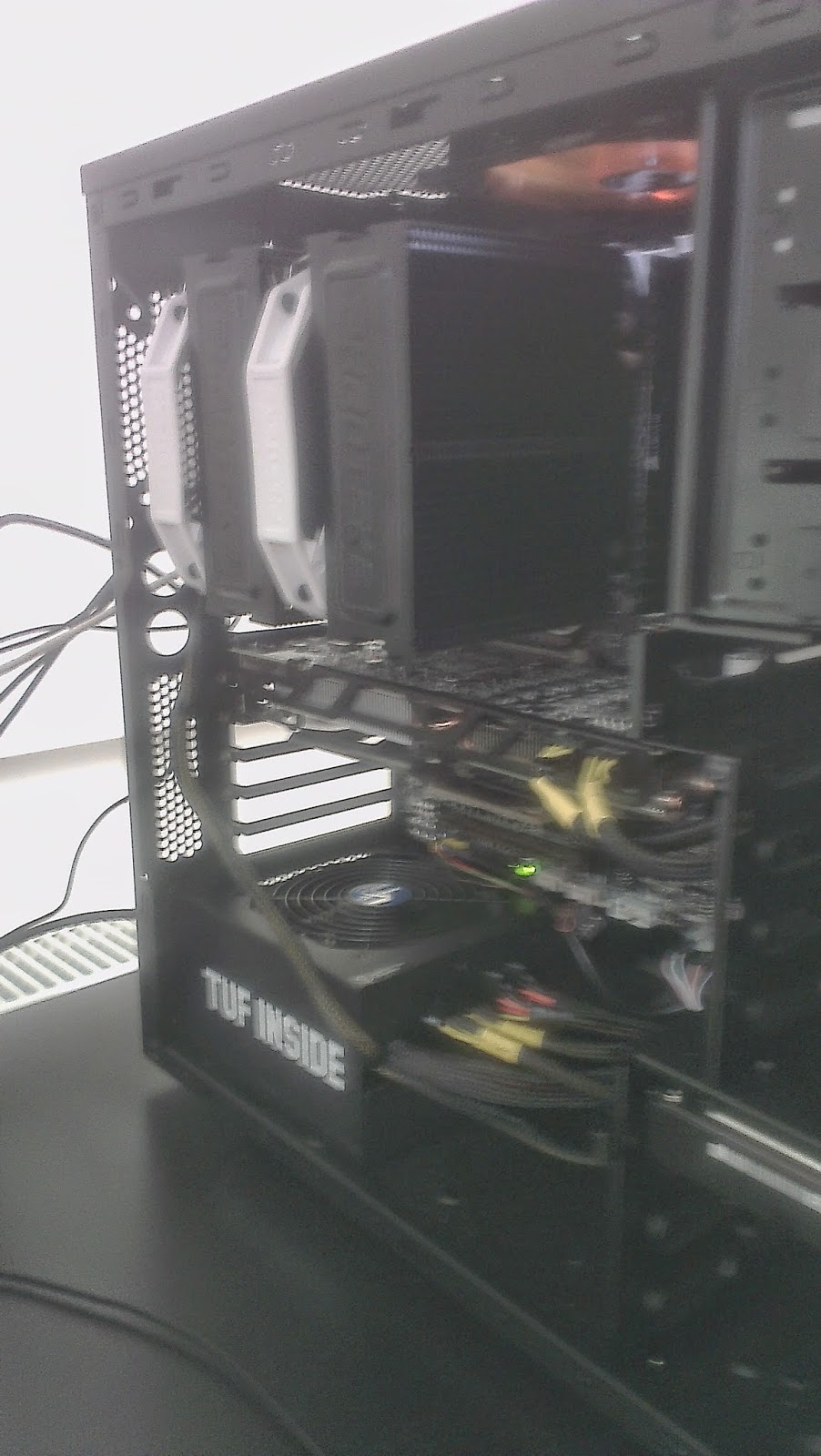 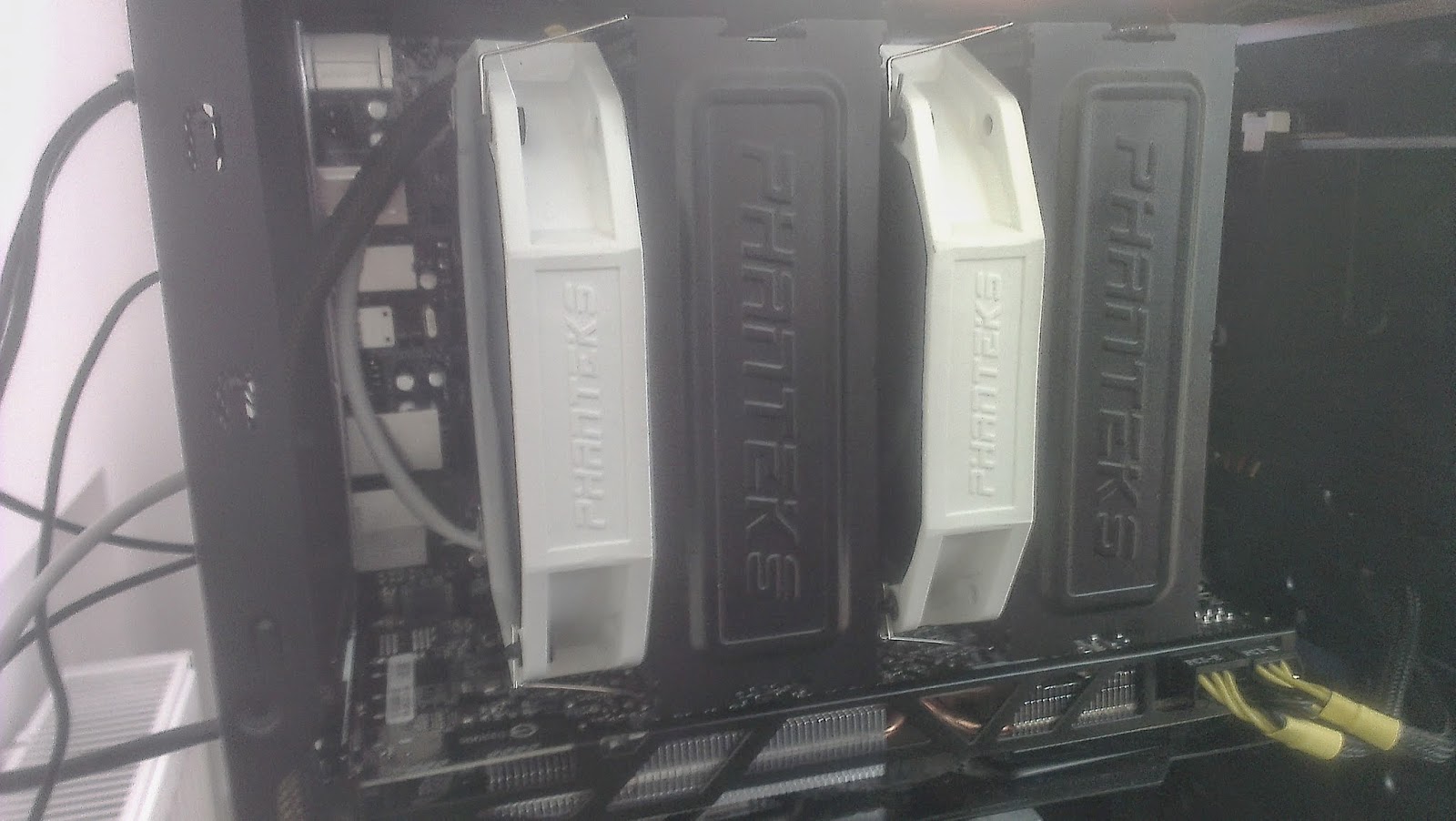 Mounting: 4/10
The AMD mounting system for this cooler is really really bad. If they had made the plastic O rings 1 or 2mm taller this would have been a 7/10 but no the AMD mounting kit is completely atrocious. There is simply no way that human will have fingers small enough and strong enough to get the cooler cross brace screws to reach the mother bracket. The way I got around this by loosening the bracket until the brace screws could reach them. Now aside from the too short AMD mounting hardware all the screws used to hold the cooler are hard to reach because they are between the two fin stacks making it exceptionally dificult to reach them if you have a short screwdriver (less than 150mm long). The heatsink is also very very large at 159 x 140 x 171mm it will only fit into larger cases and will block usage of ram super tall heatspreaders in the first two DIMM slots. If all your ram has reasonably sized or removable heatspreaders like the G.skill Ripjaws RipjawsX and TridentX series you will not have any issues and you can even install a 3rd fan for even better performance.
Anther positive is that it does not block the 1st expansion slot on a motherboard and is therefore a great heatsink to use if you have a lot of expansion cards.

Noise: 7/10
At full tilt the fans run at 1300RPM and are of above average quality resulting in them making a moderately loud but not unpleasant hum with whirring under tone and sound deeper than many of 120mm and 140mm fans I've heard. At low fan speed they are quite but still audible from one meter away inside an open case (can't close the side panel since the coolers too big). It is however the quietest cooler I've used so I rate it pretty high.

Things I want to try:
depending on how you mount the fans the cooler is 6-11mm taller than the towers alone so I would like to try if 120mm fans would be an option to allow people to use this cooler in smaller cases without losing too much performance. I would also like to try how much more performance higher RPM fans have over the 1300 RPM stock fans. The fans I wanna try are two or three of these.
Posted by Buildzoid at 4:06 PM No comments:

MSI R9 290X Lighting Physical phases: 12+2+3
Controller: IR 3567B 6+2 for the core and auxiliary. I can't find the memory voltage controller without having the card in my hand. You get control over the 3 key voltages and then you gotta pray that MSI's BIOS and AMD's drivers won't screw you over.

ASUS R9 290X Matrix
12+2+2
Controller: A re-branded  IR 3567B 6+2 0.2Mhz-2Mhz for the core and auxiliary. I can't find the memory voltage controller without having the card in my hand. This is the only card that will let you manually tune the controller's operating frequency and all voltages that exist on an R9 290X.

Sapphire R9 290 Vapor-X
8 6+1+1
Controller: IR 3567B 6+2 0.2Mhz-2Mhz. 6 Phases for the core and one for auxiliary. Memory has it's own static voltage controller. Unfortunately all the 71A MOSFETs of the AMD reference design have been replaced by 40A IRPowerStages leaving you with only 240A of current for the core and 40A for the auxiliary. The memory still uses the 71A MOSFETs.

ALL other models
5+1+1
Controller: IR 3567B 6+2 0.2Mhz-2Mhz for the core and auxiliary. I can't find the memory voltage controller because there isn't one, no really there isn't the voltage is 1.5XXV idle and drops to 1.4XXV in load which got me really confused when benchmarking Unigine one time.

BTW I will be getting the parts for my AMD rig tomorrow so prepare for even more reviews and guides.
Posted by Buildzoid at 2:18 PM No comments:

No I am not dead however due to the re-modelling of one of the rooms in the basement(where I "live" :D ) I was unable to write any reviews. However I'm back and I have some new toys so lets get to it.

Many people give Razer flack for quality. However from my experience with Razer products I can say that I had only 1 fail and that was a Naga Epic which I had replaced for a new one have been using for 2.5 years without any further issues. I also used a Razer Blackwidow Ultimate 2011 for 3 years and it never gave any problems what so ever so I hold Razer in pretty high regard as far as quality goes much higher than Nvidia (My GTX 590 was 17,000czk of pure RMA hell).
Onto the review then.

The Razer Blackwidow Ultimate 2014 Stealth (referred to as BWU14S from now on) is a fully mechanical keyboard that uses Razer orange switches. Razer orange switches are base on the Cherry MX Brown switches with a few adjustments to make them according to Razer "better for gaming" by having the actuation higher up and the reset point closer. The switches are manufacture in China but have a 20% higher keystroke rating and 33%lower error margin in their specs than Cherry MX Brown switches so as long as the specs aren't a pile of marketing BS these switches are better in every way than Cherry MX Browns. The keyboard it's self is very sturdy and has a very vivid green LED backlighting with 16 intensity levels. The keyboard has 10 key roll over and anti ghosting technology.When testing the 10 key rollover I found that up to 14 keys register at a time.
The keyboard has 11 fuction keys that can be used by holding down FN and the corresponding F key to: mute sound, lower volume, increase volume, skip back, pause/play, skip forward, record macros, enable gaming mode, decrease backlight brightness, increase backlight brightness and put the computer to sleep.
The enable gaming mode function can be configured to disable the windows key, alt+tab and alt+F4 in order to stop you from accidentally exiting a game.
The keyboard has five macro keys on the side. Every single key on the BWU14S can be rebound to a keyboard function, mouse function, a command for another Razer Device, macro, profile switch, program launch, multimedia function, windows 8 charm, windows shortcut or disabled. Yes this keyboard allows you to bind almost anything to every single key on it.
The keyboard has a finger print proof matte black finish however the key caps themselves are plastic and stain from oil easily which I found out when I face-keyboarded out of boredom only to end up polishing my key caps for 5 minutes to get them from shiny back to being matte.
The keyboard is not cheap costing ~3,799czk (190$ after 21% VAT) and does lack some features like the option to choose which keys light up however it is one of the few mechanical keyboards that is backlit and completely rebind-able. I like this keyboard and it has taken over my BWU11's role of main keyboard until it gets replaced, which won't happen until it breaks.
It broke
Posted by Buildzoid at 4:18 PM No comments: