Many Crossfire R9 290X and R9 290 owners bought the refrence blower cooler because "it gets better temps in crossfire". This is completely wrong. The refrence R9 290X hits 93C on the uber fan profile when on it's own. So if you put a another heat source bellow it it will hit 95C and have serious issues staying cool regardless of the fact that said heatsource is not dumping the majority of it's heat in the case because the R9 290X above it only has a 2C margin for warmer intake air.
The back of an R9 290/R9 290X gets stupid hot especially the VRM section which is also closest to the intake fan of the card above it. This results in the following happening: 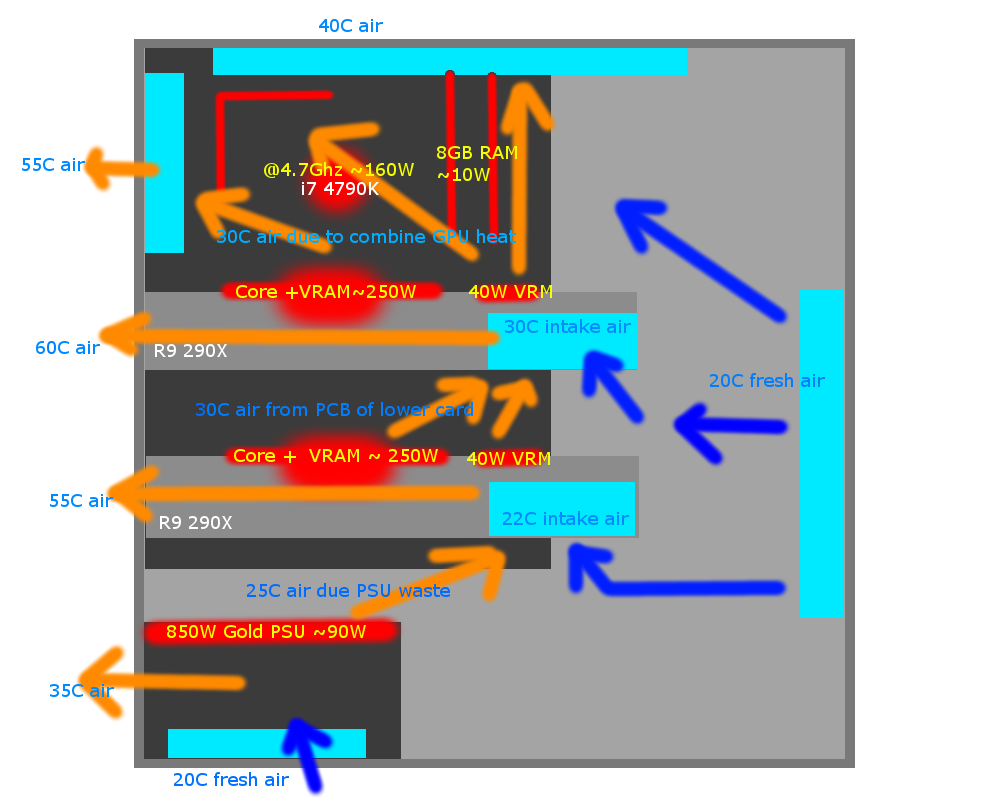 With non reference coolers that dump the used air back into the case this is not an issue because the cards is operating around the 75C range when alone. This gives the non reference card a +20C allowance on intake air before it hits the same temp as the reference design.
Non refrence coolers also have about 2 to 4 times more air passing through their finstacks making the output air of a custom cooler rather cool typically in the 30-40C range depending on load and clocks. Now assuming your case has fresh air going to all areas at all times the 40C exhaust will be mixed with the cool outside air meaning that the top card will at worst be getting air in the 35C range meaning it will hit the 90s. This would look something like the image bellow: 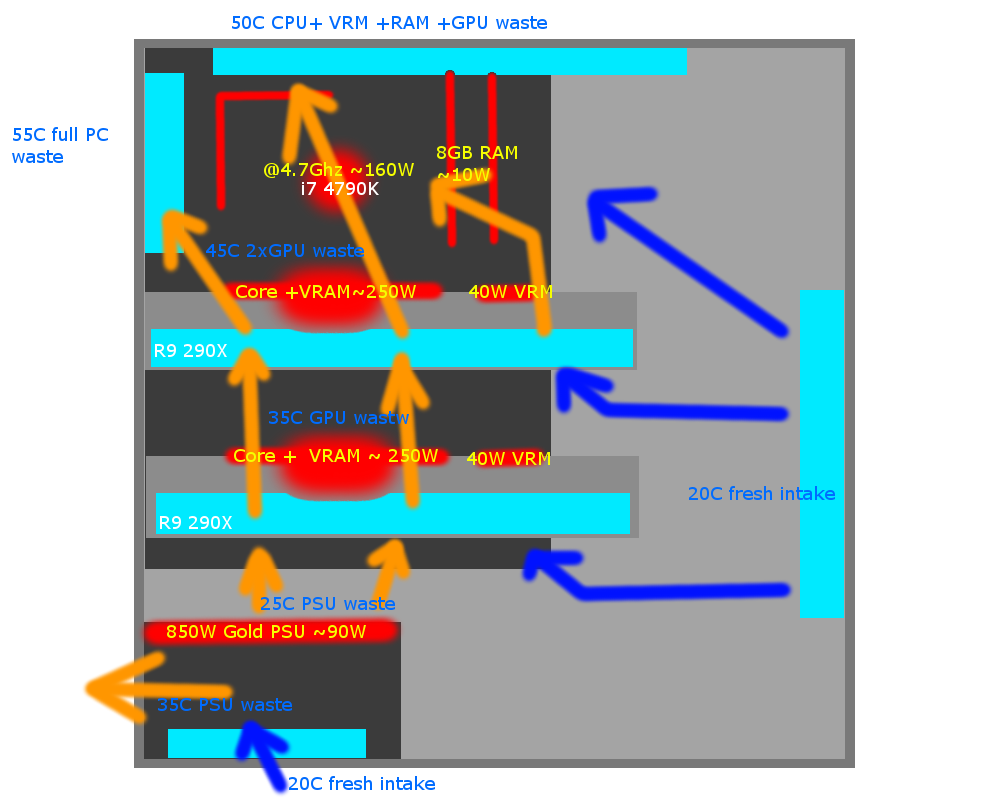 Another thing to note is that this only truly applies to really high power draw cards because the blower coolers do in fact keep in case temps lower than radial fan designs just this difference is not big enough to keep 93C cards from hitting 95+C.

It has has next day shipping in many places. The selection includes some capacitors for motherboards and GPUs and has all the potentiometers you could need. The site is now listed in useful links.
http://www.rs-components.com/index.html
Posted by Buildzoid at 3:46 PM No comments:

An update on what's happening

I've launched a new blog. It's a really really terrible webcomic which is NSFL but people with my terrible humor may enjoy. You can find it here

I will be posting a write up on CPU power draw scaling for Bulldozer Vishera Richland and Trinity.

I'm considering trying to create a stripped down and simplified version of the English language to lower the number of words needed to convey information
Posted by Buildzoid at 4:38 PM 1 comment:

Yesterday I got my new Lenovo Z50-75 laptop without an operating system for 11200czk with shipping and 21% VAT. Hardware wise it's pretty good using an AMD FX7500 APU with a base clock of 2.1Ghz 4 cores and a max turbo of 3.3Ghz. The integrated GPU has 384 stream processor clocked at a peak of 533mhz. The main GPU is also has 384 cores but is clocked at ~800mhz. As of right now it only has 4GB of RAM clocked at 1600mhz but I plan to upgrade to something faster soon. The laptop it's self is made of very soft plastic but at this price point I don't mind. The keyboard is rather flexible due to this however this somewhat of a good thing because it adds extra cushioning to the keys. The only major issue I have with the keyboard is that Lenovo gave it a tall enter key and ended up wreaking the layout of the key to the left of it. So I mess up apostrophes and slashes but even with that I prefer this keyboard to the one on my mac book pro.
Now lets get to the bad stuff.
The screen is freaking awful. It's a TN as far as I can tell with good horizontal angles and an OK vertical but fails epically in the color department with very obvious gradient stepping and washed out colors. The good thing about the screen is that it's 1080p so while colors will make your eyes bleed it's high PPI and contrast make text look excellent. The LED backlight is very very strong when on it's maximum setting and in my opinion doesn't go low enough even though it has 15 different brightness levels.
Software support for this laptop is iffy since I still haven't managed to install the ELAN/Synaptic touch-pad driver and so have to deal with the stupid tap to click that is enabled form the get go.
My final issue with the laptop is the Seagate SSHDD. It manages to pull 2x the amount of power at max and minimum load of a regular mechanical Western Digital Blue HDD while doing very little for performance. Which is bad for 2 reasons the first is that it's wasting power and the second is that the SSHDD is right under my right wrist and as such is really really annoying because it creates a hotspot through the plastic casing above it. The only reason why this stupid thing is in this laptop is because it's hip to shove SSDs into everything these days.

You can expect a full review in about a month so I get some usage out of the laptop and testing.
Posted by Buildzoid at 2:22 AM No comments:

Zzolio just released a great Vmod guide for the MSI GTX 980 Gaming. You can find it here and it's going to be in the useful links page.
Posted by Buildzoid at 12:13 PM No comments: 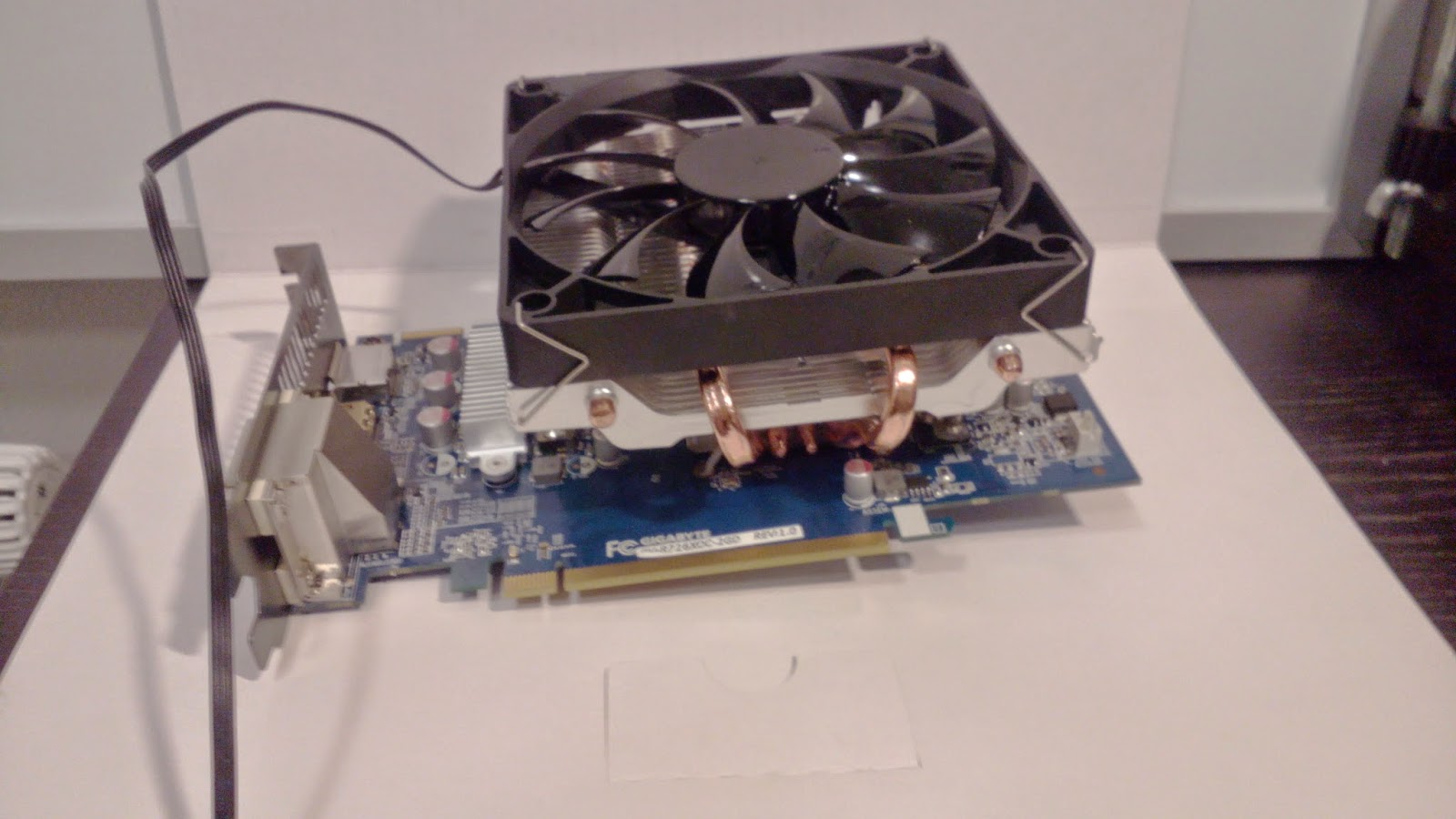 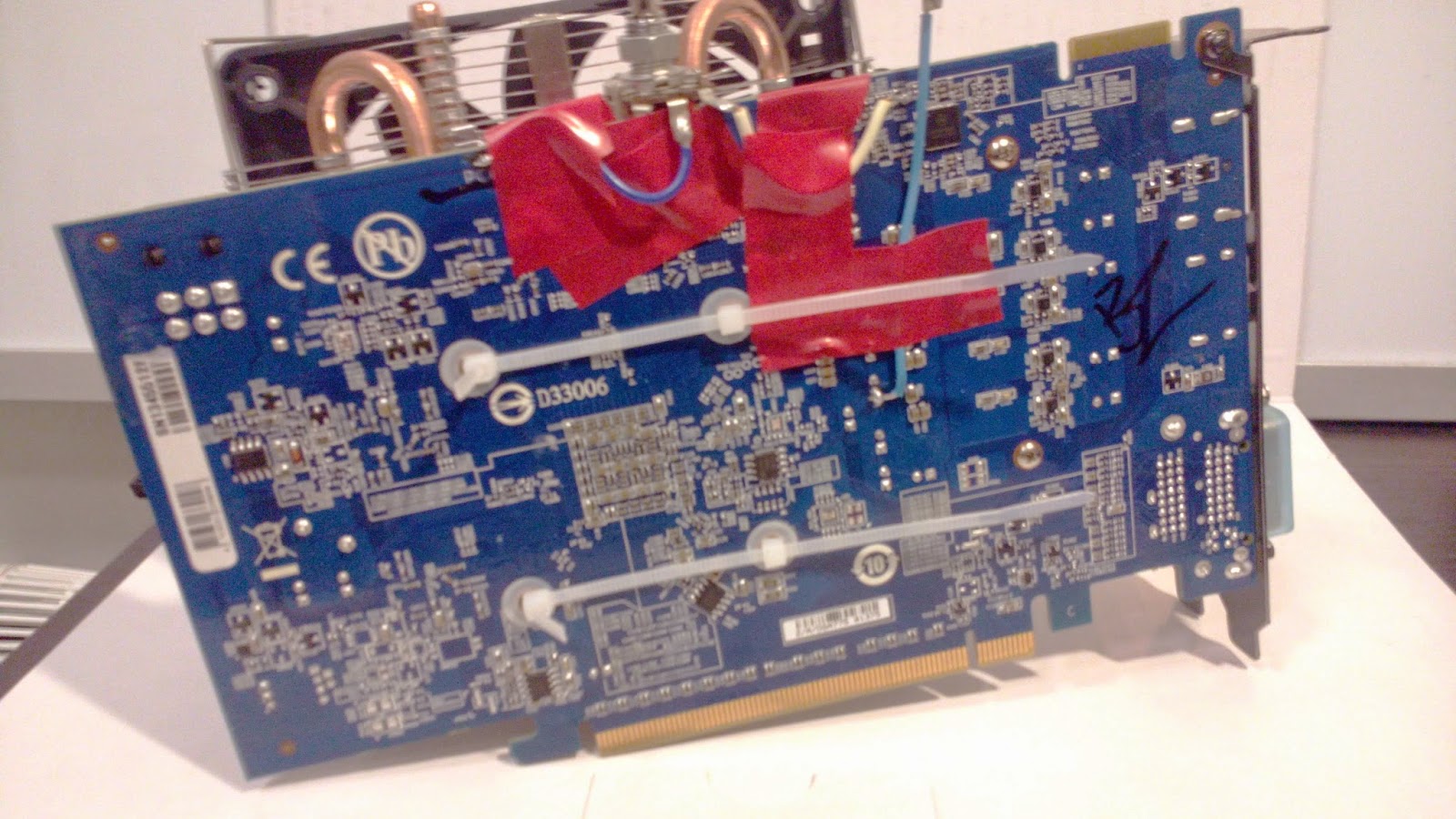 And this is the V mod I did on the GPU. I finally got my hands on a 10Kohm potentiometer so I got the core voltage under manual control. Unfortunately a 10Kohm potentiometer is not enough to keep the voltage in "safe" territory and so the card has a minimum 3D load voltage of 1.47V. The 3rd wire on the back is hooked directly to the + leg of one of the output caps and ends in crocodile clip to allow for easy measurement of core voltage with a DMM. 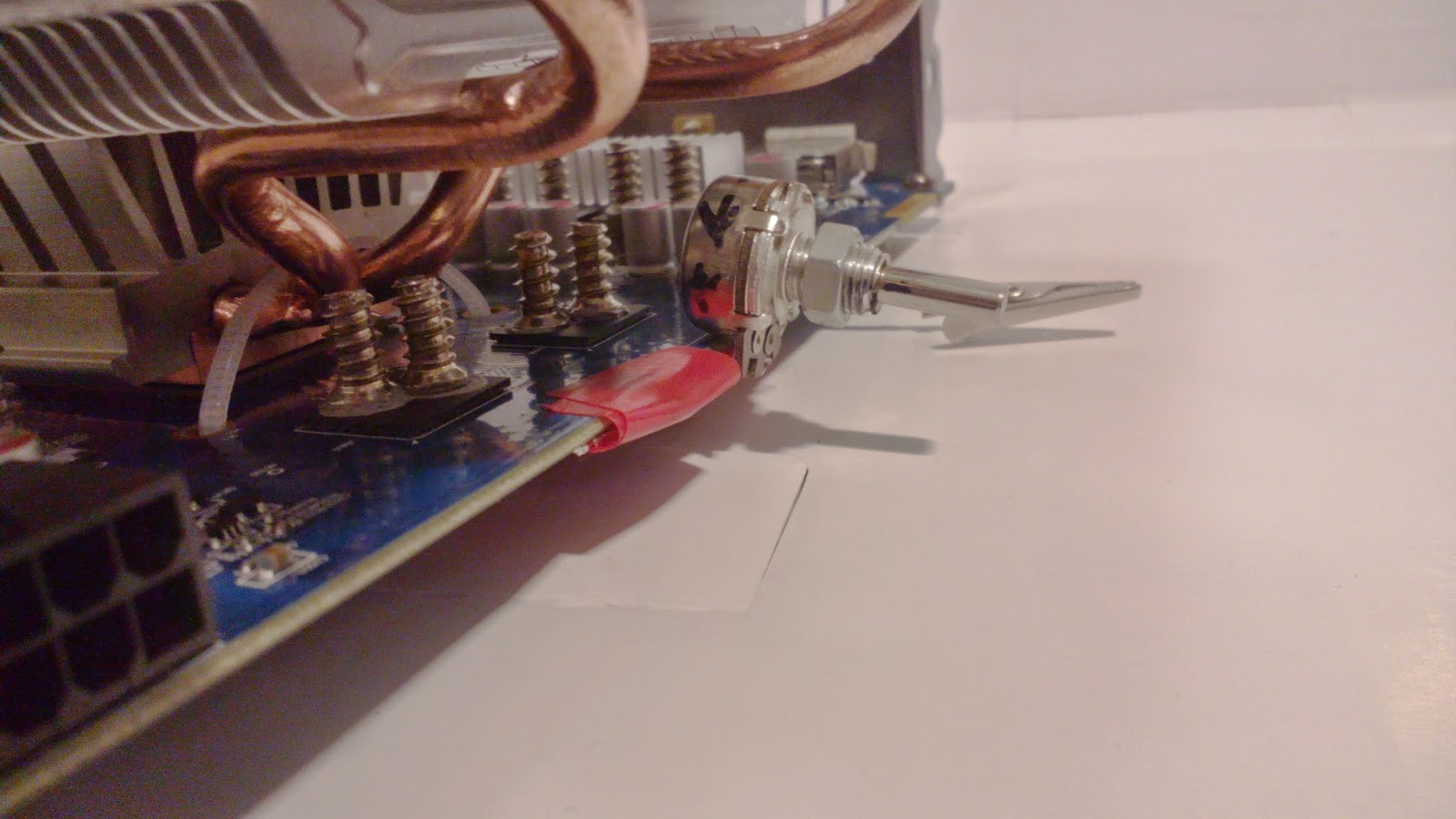 Here's a shot of the side of the GPU. You can see both the potentiometer and the crocodile clip behind it 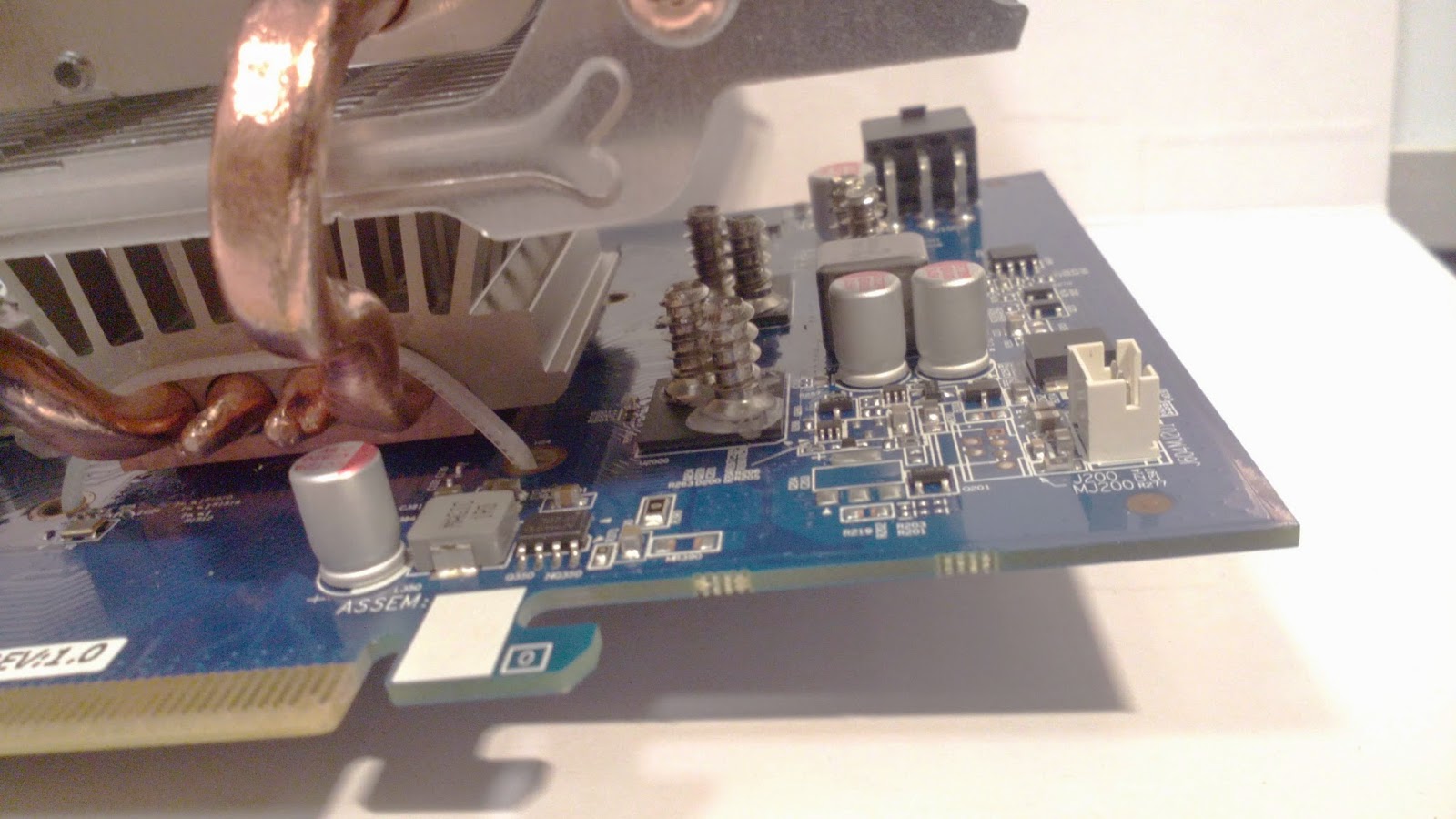 The screws on VRAM in this and the shot above are there to cool the memory because in my first runs the memory overheated and crashed when above 1670mhz. That's a massive problem on a card that has an anemic 128bit bus feeding cores 896 stream processors running at 1450mhz. 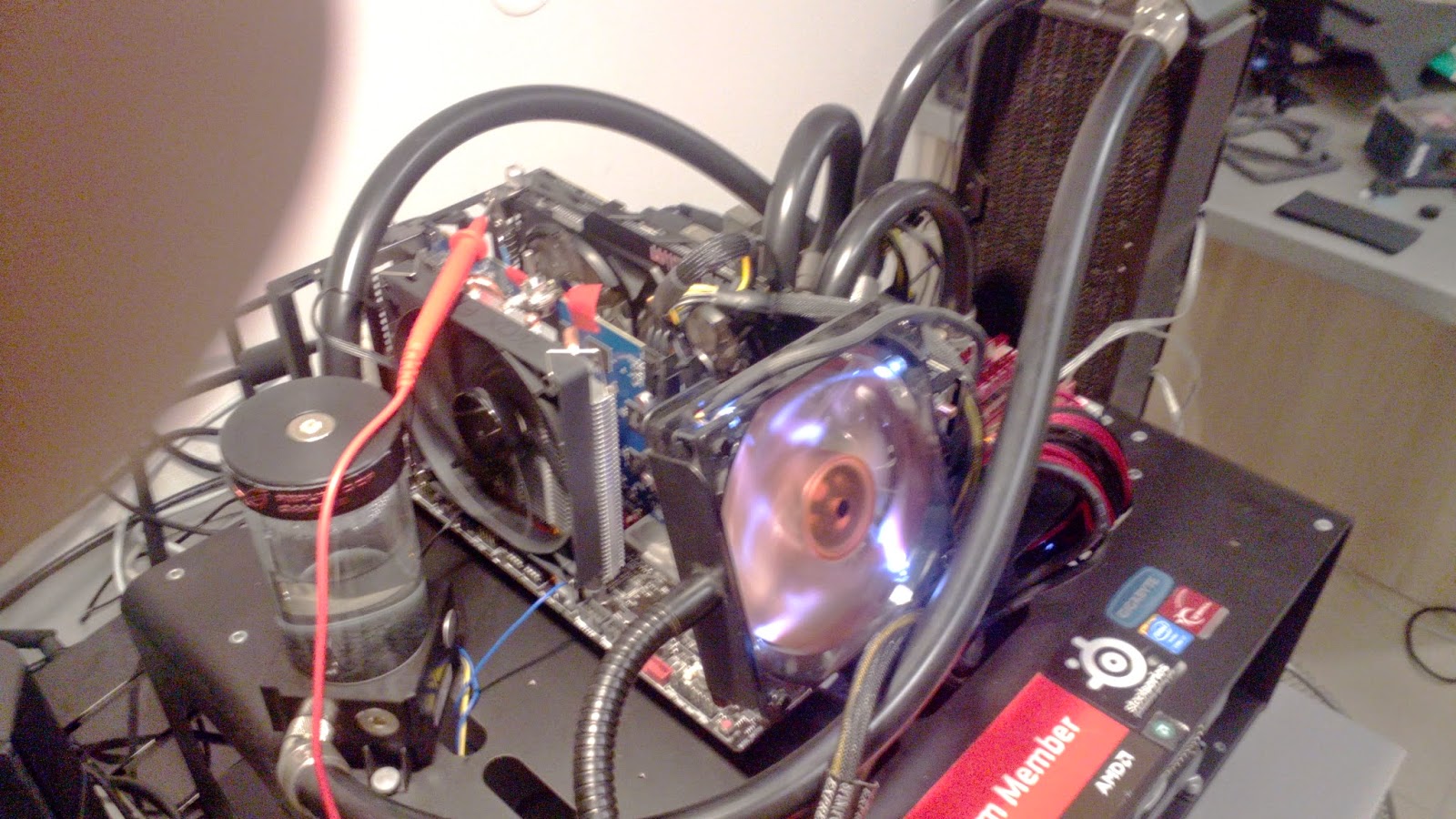 And here's the card running in my main system. The Gelid heatsink did a great job and kept the core bellow 70C° throughout my benching session. The Hynix VRAM on the other hand was terrible and kept me bellow the 1600point mark in Unigine Heaven DX11 Extreme.

Posted by Buildzoid at 12:23 AM No comments: