My Phenom II X4 965 BE didn't die! This means that I will be using it for all my fan testing because it's easier to setup than an FM2+ CPU and puts out more heat which should lead to bigger temp differences in my testing.

I've also got a new fan controller to use for fan reviews so now I will do noise and temp testing at varying fan RPMs.

My main system is also back up and running so I now have more space to work in. I also bought an Asrock 970M Pro3 motherboard to review and here's a terrible video overview of it that I made. You'll be happy to know that my actual review of the board will be held to the same standards as all of my other blog content.
I've already played with the board a little. So far it's been OK. However the VRM is making me have second thoughts. Luckily the retailer I bought it from offers an extended no questions asked return policy so if I do burn the board(I hope I don't) I can just return it.

In other news I've redone watercooling loop on my main system. 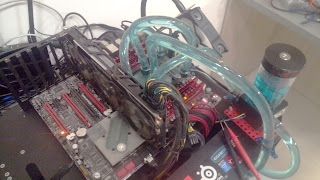 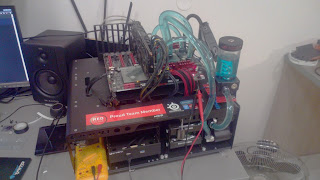 The tubing is now Tygon 15.8mm by 12.7mm. It's really soft and flexible so it doesn't kink. It's meant for used in laboratories and so it won't get damaged by most liquids. The only down side to it is it costs 2x what other tubing does. The fluid is just a mix of car cooler anti freeze and distilled water. The fittings are 16/12mm EK Black Nickle fittings. Everything else stayed the same as before. 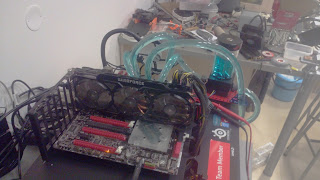 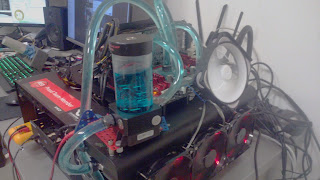 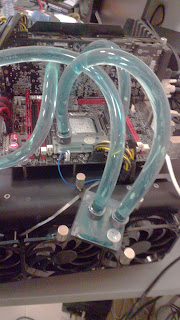 I ended up getting rid of the 2400 RPM Noise blocker because while it's not all that loud it has an incredibly annoying pitch.

The best thing about this loop upgrade is that I've
rebuilt it in such a way that I can swap CPUs without having to drain the loop.
Even though I swapped over to using Coollaboratory Liquid Ultra between the CPU block and CPU my temps haven't gone down so I guess I've hit the dissipation limit of my radiator and the 2000RPM Sickle Flow fans.

Just by the way:
TekSyndicate is giving away a GTX 980 Ti AMP EXTREME!
Posted by Buildzoid at 11:13 PM