The road to voltage Fury.

So I just made major step towards making the R9 Fury volt mod guide. I have revived the R9 290X Windforce which I killed and managed to get it's VRM under manual control.

The first thing I learned about the IR 3567B is that it's pretty smart. So smart, that the damn thing will not let the card run if it doesn't sense current on the VRM phases. With most GPU voltage controllers you cut the power sensing lines and they just ignore the fact that the current reading of 0.8A is wrong and continue running the VRM like nothing's changed. Not the IR 3567B, no the IR 3567B shuts the card down if it sense 0A on the phases. So after I tore all the SMD 300ohm ISEN resistors off the card in hopes that I would remove all power limits. I ended up resoldering every single one of the damn things. However I don't have SMD 300ohm resistors and so I improvised to end up with an R9 290X that looks more like a modern art piece than a GPU. 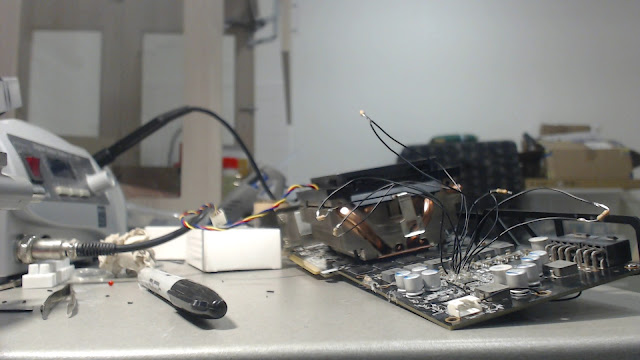 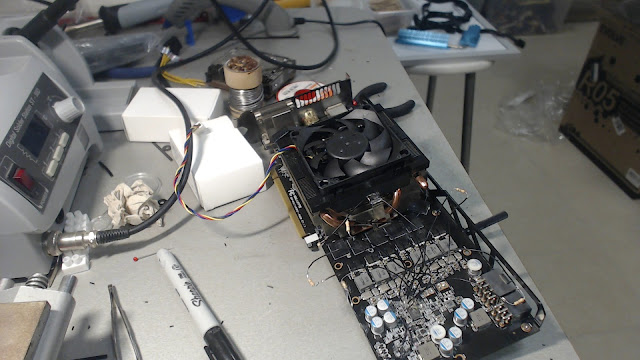 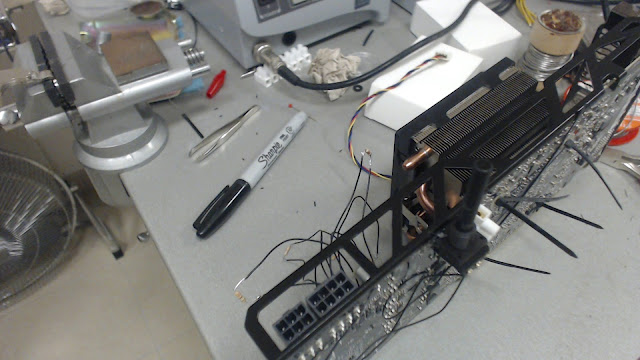 I also managed to under volt mod the card so it ended up running at 0.56V idle instead of the 0.968V that it should idle and boot at and so naturally it didn't work. I managed to fix that too and the card now boots and runs. At least on stock voltage I haven't tried overvolting it yet because the Windforce cooler no longer fits and I've run out of Seidons to ziptie on to it(it might sound like a terrible idea but the Seidon 120V rev2.0 can keep the 290X sub 70C even with 1.4V and at 55C when running stock volts and clocks).
Either way after this volt modding adventure modding the Fury will be a walk in the park.... I hope.

PS I'm very much aware that the AMD 125W CPU heatsink can't cool an R9 290X however I needed a cooler that could keep the GPU running long enough for me to get to the BIOS and it did that so you can keep the comments about me being an idiot to yourselves thank you very much.


Thank you to Cooler Master for powering this blog by giving me a V1000 PSU.
Posted by Buildzoid at 5:28 PM