As you probably already know it is possible to unlcok the R9 Fury from it's normal 3584 stream processor to 3776 processor, 3840 processor or even 4096 processors at which point it's basically a Fury X.

This guide is a simplification of this guide. When I was doing the process for the first time it took me close to an hour to get through it all. So this is my take on how to make the guide simpler.


First of all download this file  (dropbox mirror) and python 2(Python 3 does not work!). The filecontains all the programs and scripts that you need to unlock your Fury. You need Python to run one of the applications that makes flashing possible.
I hope that none of the software creators have a problem with me putting everything together and re-uploading it. If you do you can just leave a comment and I'll take it down again.

Unzip the folder to where ever you want. Then go to the folder CUinfo and run the program "cuinfo16".
And you'll get to see something like this: 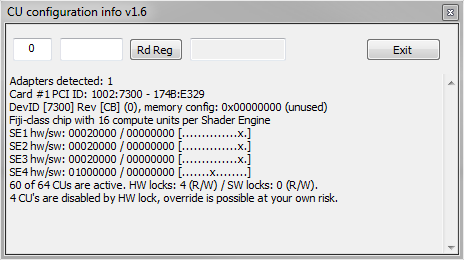 If the last line says something like "X CUs are disabled by HW lock, override is possible at your own risk." You can try flash the card.

In order to flash the card first go into the ATiFlash folder and run the script called "BackupBIOS". This will create a file called: FuryBIOS.rom. Copy and paste this file(DO NOT CUT AND PASTE! THIS IS YOUR WORKING VANILLA BIOS IF THINGS GO SOUR YOU WILL NEED IT!) to the AtomTool folder. Then go back to ATiFlash rename the FuryBIOS.rom to FuryBIOS1.rom and then flip the BIOS switch on the top edge of your Fury. Now run the "BackupBIOS" script again. Once it's done flip your BIOS switch back to it's original position. Now go into the AtomTool folder and run the "makeroms" script. This will creat 3 files called:
3776spBIOS.rom
3840spBIOS.rom
4096spBIOS.rom

Copy these to the ATiFlash folder and run the script called "Flash XXXXSP BIOS" the XXXX stands for how many cores will be unlocked. First run the 3776 core script then restart the computer and check using GPU-z that you now have 3776 cores. If you do stress test the GPU by playing some games or running a stress test. If it's stable you can run the "Flash 3840SP BIOS" script. Then do the same that you did to check that the 3776 BIOS worked. If it does great and you can run the "Flash 4096SP BIOS" script. Then check that it worked the same way you check that the 3776SP and 3840SP BIOS worked.

The R9 Fury and Fury X volt modding guide is now up!

Thank you to Cooler Master for powering this blog with their amazing V series power supplies.
Posted by Buildzoid at 11:21 AM