Say hello to the TITAN Strangler + some benching data and thoughts on the Fury X. 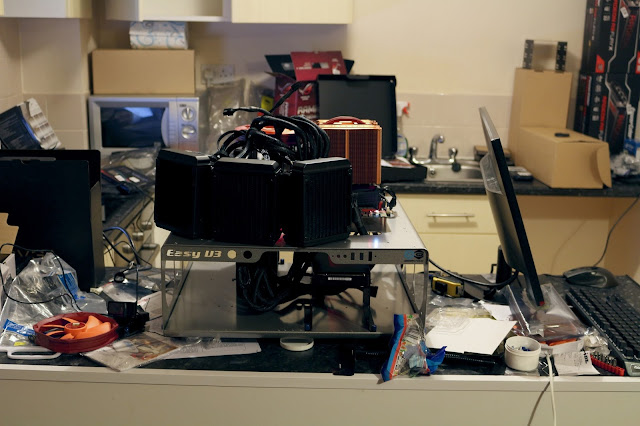 Well that's how I dealt with having to cram 3 radiators onto an open air test bench. They are literally just sitting there All the pipes are twisted 1 time over and then held together by some velcro straps to make sure that none of the radiators falls of the bench. It looks pretty bad but it works just fine so I have 0 plans to change it.

My only regret right now is the RAM. The default XMP doesn't work with the RVE at all. I have managed to manually time and clock it to a variety of settings however due to this being my first time with DDR4 and X99 I spend more time trying to get all 4 sticks to boot up than actually running benchmarks(dual channel vs quad channel is a big deal). 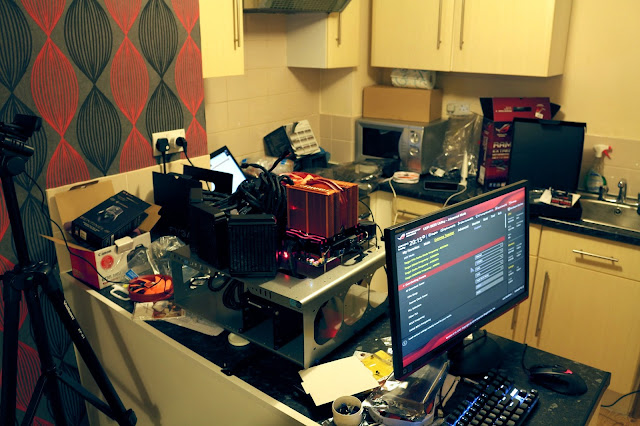 My IKEA furniture was supposed to arrive today but due to a mess up on my part I didn't actually get any of it and so I'm continuing with benching from the kitchen counter. The monitor is an AOC G2460VQ6. As far as I know it's the cheapest Free Sync 24" monitor. The colors and viewing angles are pretty good and it starts up way faster than any of my ASUS monitors so I'm happy with it. It also came with a very complete accessory pack including a DP HDMI and VGA cable. However the DP cable turned out to be really dodgy once I started to push over 1200mhz core clocks and ended up running the rest of my benching with HDMI. I don't particularly need Free Sync on this monitor because it is my secondary to the 2560X1080 LG 29UM67 which I'm using because I hate the curve that the 3440x1440p Free Sync monitors come with. 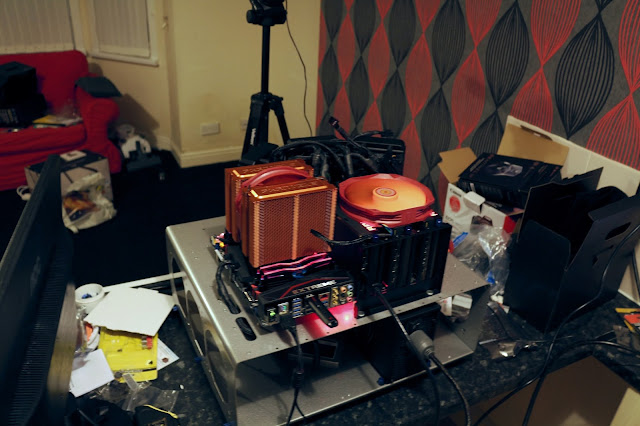 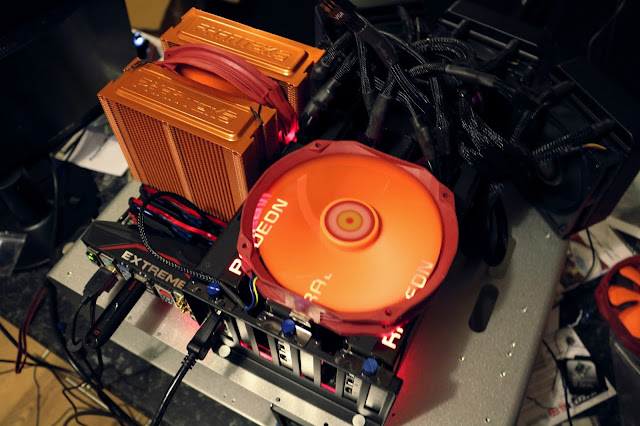 When I go for my serious attempts I will be running all 3 cards without the shrouds and this fan will be helping with keeping the VRMs cool. 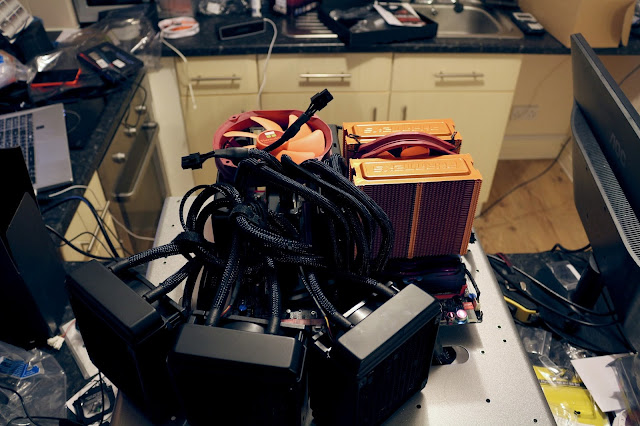 And this mess of wires and tubing is where the system gets the Strangler name from. I do have an idea how to clean this up however my budget for computer parts has reached an O.

!DONATE NOW TO RELIEVE THESE POOR POOR FURY XS OF THEIR SUFFERING!
(don't actually do that. 155 people donating 5$ would just lead to me buying another Fury X causing further suffering)

Now seriously the cards are running just fine like this however it is an awful mess. Now then lets get to the part where I talk overclocking.

Some overclocking of the Fury X
First thing first the Cooler on the Fury X is a freaking beast. The room had an ambient temperature of 20C according to the heating controller and these cards were running sub 40C even after I fed them +174mv (how to get more voltage in Trixx using a hex editor by /u/Meretrelle). I was running all 3 cards in Crossfire the whole time I was overclocking but I was overclocking them one card at a time.
All 3 cards were running +174mv on the core with +50% power limit and 100% fan speed. The first card is running PCI-e 3.0 X16 from the CPU, the second is running PCI-e 2.0 X4(this does not affect scores at all!) through the chipset and the third is running PCI-e 3.0 X8 from the CPU. This configuration has the lowest possible heat density and puts less strain on the CPU's system agent than running all 3 cards from the CPU's PCI-e.
The primary managed 1250mhz core 572mhz HBM it finished 3Dmark Fire Strike without going over 37C°. This card also ran without any artifacts until I started overclocking the other 2.
The secondary did 1200mhz core 555mhz HBM and ran at the same temps as the first.
The third card did 1210mhz core and 566mhz HBM and ran at the same temps as the other 2.

My best score for the session was 31 761 points because of a huge CPU bottleneck caused by  losing 2 channels of RAM and running only 4.67Ghz. To be fair I wasn't really focusing on getting a high score and was more interested in the maximum GPU clocks.


My other observations so far are:
At 4.67GHz the 5960X can't keep up with the FuryXs which led to absolutely terrible FPS scaling.

The RVE's retry button is god send allowing me to get RAM settings that I would otherwise abandon to boot.

Booting all 4 sticks of RAM is really hard. To get my best settings to start with all 4 stick I had to use 1.935V RAM voltage. I also confirmed that the RAM is indeed Samsung based.

I need to test the new AMD Crimson drivers to see if they don't lower the CPU bottleneck that I have right now.

35.2K Fire Strike is definitely within reach of 3 Fury Xs however the CPU power needed is way higher than what a 3 way TITAN-X setup needs. (4.7GHz on T-X vs ~5Ghz on Fury X)

There is a possibility that the apparent stability of the system during testing was caused by the CPU bottleneck leading to the GPUs not being used 100%. Testing with Fire Strike Ultra will either confirm or refute this theory.

Running low temps on the Fury X seems to be the key to high clocks and getting good voltage scaling.


My Opinions(may change as time passes)
IMO the Fury X is a budget/ambient overclocker's dream. However an overclocker's dream and should not be mistaken with a gamers dream. This is because card is incredibly fun to overclock. It is however not "easy" to overclock unlike the GTX 980Ti where the ASIC is everything and you either hit 1550mhz or you don't. The Fury X scales with everything. If you can run it colder. It clocks higher. If you give it more voltage. It clocks higher. Now there are many cards that do this. However the Fury X is the first card where the card already comes with pretty much everything you need.
Voltage Scaling ☑
Temperature Scaling ☑
Beastly VRM ☑
Great Cooling ☑
Basically Unlimited Software Voltage Control ☑

The only things missing are low CPU overhead and high core clocks. However if you just look at percentages the average 980Ti does 25% over stock. My best Fury X did 19% and I didn't think I maxed it out yet(I didn't try more than 1250mhz). 25% or 1312mhz core is probably doable on a Fury X and if it is I'll do it. I approach GPU like games. It's no fun without any challenge. However too much challenge is also bad. The Fury X hits the happy medium.

Well the Fury Xs blew me away and left me with a great big stupid smile on my face I think I got my moneys worth. Now I just need to get the RAM to behave and the CPU to not die in 3Dmark Physics.

BTW: None of this is "gaming" style overclocking. I consider an overclock good if it finishes the benchmark I really don't care that it might crash if I run it for an hour or 2 because I only need it to work for the 2ish minutes that 3Dmark needs to run. I will do a proper 24/7 overclocking guide for the Fury X some time soon. I will also be helping with some modded BIOSs for the Fiji cards with the goal to run higher HBM voltage and power limits along with more stability oriented power play tables.
Posted by Buildzoid at 6:00 PM 8 comments: