I hate power management algorithms. Sure they save you some power but they make overclocking a nightmare. The smarter they try to be the worse they are. Back when this blog first started I wrote a really long and terrible rant about Nvidia's boost algorithm and AMD's beginnings of what is now know as power tune. The TL;DR of that article can be: Nvidia's is dumb because you can't set core clock and AMD's is dumb because it's broken. Well Nvidia's hasn't changed and AMD's is possibly more broken now then ever before.

I promised a Fury/ Fury X overclocking guide some time ago. I also promised to whoop the ass of Nvidia GTX 980 Ti SLI setups in 3Dmark. If you follow me anywhere where I can be followed you are aware that I haven't delivered either and the facebook followers should know that I've complained that I can't even beat my old Fury score because AMD's drivers are garbage.

Well today I will show you what the problem is.

TESTING METHOD
I used free cam mode in Unigine to park next to a wall so I could quickly track FPS changes. I was running Unigine Heaven at very low settings so that I was getting about 274FPS at stock clocks. I was running Unigine windowed and had Trixx open so I could change settings and immediately see the FPS changes. After every batch of readigns I checked that the FPS at stock clocks was still the same.

Here are the results in all their glory: 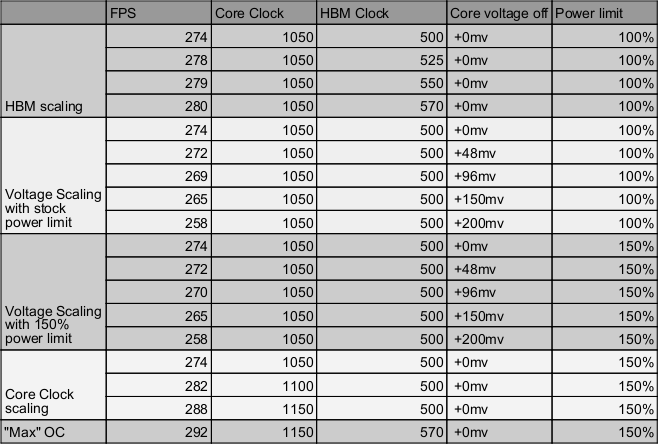 The core clock and HBM clock scaling in Unigine at 1440x900p is unsurprisingly garbage however what is surprising is the voltage scaling. You can see that even though I did not touch core clock or HBM clock, FPS goes down as I raised core voltage. Also note how power limit did nothing to prevent this drop in FPS. Basically AMD's power tune is as usual completely freaking broken.

Now I would like to see if this is the case for all Fury Xs so if you have one could you do me a favor and just check what happens to your FPS if you're at stock clocks and set core voltage to +96mv and to +198mv. you can mod Trixx to do that using this guide and post your findings in the anonymous comments bellow this post. You will need to run at least 55% fan speed to prevent the VRM from overheating.

For me this perfectly explains why running a 1225mhz core clock with +175mv scores lower than stock clocks in 3Dmark.

Luckily I can just hard mod the card for more power however I'd rather not do that and so I started doing a little investigating. First thing I found is that my PowerColor Fury Xs have 2 100% identical BIOSs. This goes against what some reviewers said about the Fury X coming with a 350W and 250W BIOS. So I've started searching for a 350W BIOS in hopes of getting rid of at least some of the negative scaling. I've also tried to contact AMD about providing a custom 600W BIOS but I doubt I will get a response much less an actual 600W BIOS. So I'll probably end up soldering 600ohm resistors in place of the 300 ohm resistors used for current sensing.

Update:
So I've tried several custom BIOS with power limits as high as 768W and got no benefit. I also tried the clock blocker program also no benefit. I'm going try a 65000W BIOS but at this point I don't think it will make a difference.

DON'T READ THIS IF YOU DON'T LIKE PEOPLE COMPLAINING
As you've probably noticed the table is missing 2 of my favorite data sets. Real world core voltage and power draw are both missing because someone stole my parcel which contained the equipment for measuring those. I still can't believe that the UK doesn't offer pay on delivery. I'm also in limbo about ordering anything else because the idiots running deliveries here would probably leave that in front of my door too.
Posted by Buildzoid at 9:29 PM 13 comments: