So I noticed that I forgot to include the 3584 core BIOSs in the last BIOS pack. Those are now included. I also got my hands on a Windforce Fury BIOS so those of you who have can now enjoy the magic of overpowered BIOSs. Also apparently the 3776 core and 3840 core BIOS for all Fury cards were name swapped this should now be fixed. Enjoy!

For those who do not know what the custom BIOSs are

I'd like to make a "pro" BIOS for the Nano however I do not want to set peoples GPUs on fire so I need a Nano to test with. Even as much as I like to think that I'm a famous overclocker. I'm not and so while I can ask AMD/Sapphire/Powercolor.... bla bla bla for samples I don't get them. I think you get the idea of where this is headed. I need money. There's a donate button in the top left of the page.

BTW if you're wondering about my voltmoding progress with the Fury X. Then I got good and bad news.
The Fury X I started with still works. The bad news is that it's currently stuck at +20% Vcore and I can't really bench the card till I fix that. I do know how to fix that because I already did the same thing to my 290X. The problem is that the fix isn't very tidy and I'd like it to look good. It also doesn't help that the fix makes the Volt mod less sensitive. So I'm currently thinking about how to fix the card the best way.

Here's a silly Fury X for the time being 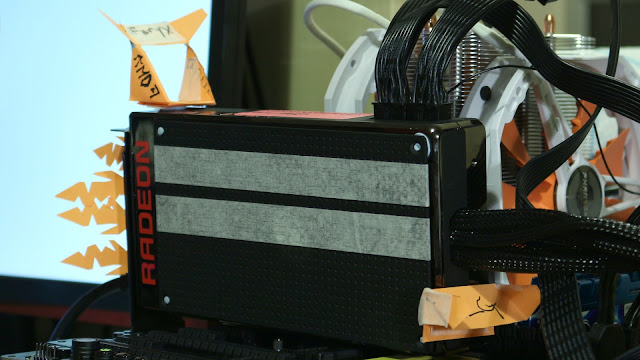 Also I'm considering throwing the Fury Xs on Dry ice if things go well on the stock cooler. Should be pretty awesome based from what Joshy Ocuk told me at The Big Freeze. Apparently HBM absolutely loves cold and at around -70C I won't even have to do much to keep the card happy since the cold bugs are bellow -100C°.
Posted by Buildzoid at 6:31 PM