Thank you to ASUS for loaning the RX 480 STRIX OC 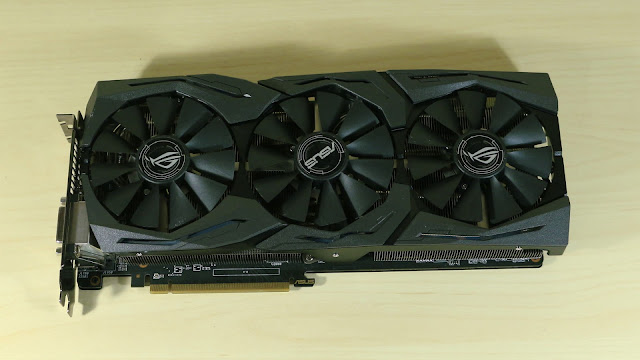 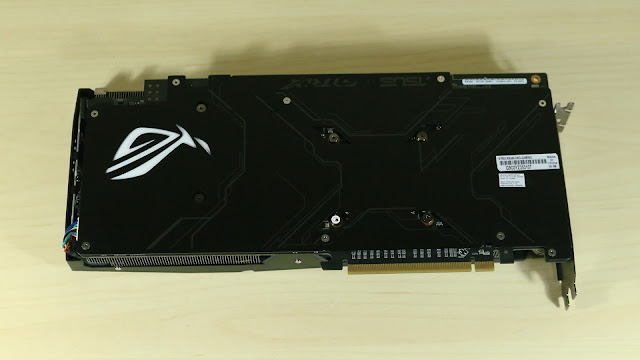 The backplate adds rigidity and is separate from the main heasink so it's not necessary to remove both if you want to get to the front of the PCB. It does not help cool the PCB but the holes over the VRM section stop it from causing unnecessary heat build up in the VRM area. 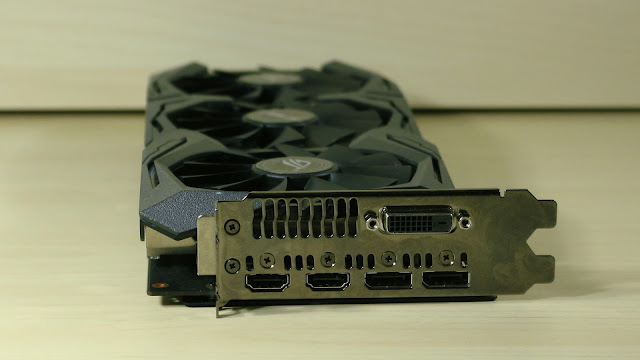 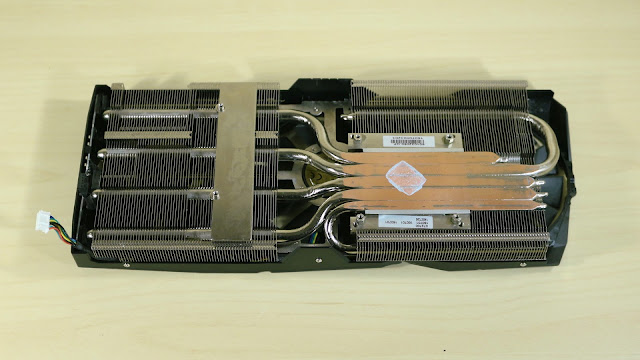 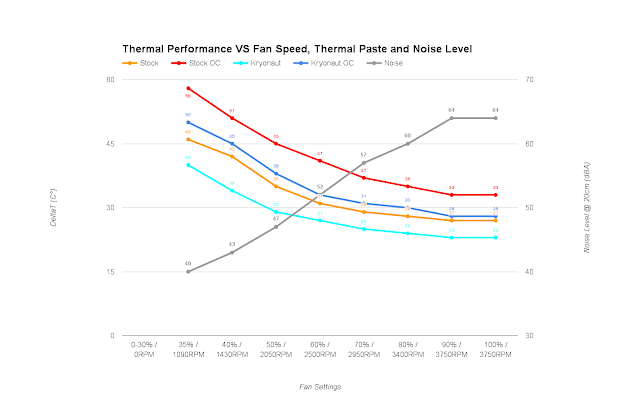 The noise measurements were taken 20cm away from the card on an open air test bench.
The GPU was kept under load by the Graphics Test 1 from 3Dmark Firestrike running windowed using the regular preset windowed at1440x900p with 8xMSAA.
The OC test is 1370Mhz(higher core clocks simply were not stable at high temperatures) core with +50% power limit +100mv using sapphire Trixx.
I test from the lowest fan speed to the highest this means that I actually wait for temperatures to come down this prevents me from getting low temperature measurements by taking measurements too early.

Notes:
The RX 480 Strix I have has a 86% ASIC quality and the core pulls about 20W more than the core of the RX 480 GTR I last reviewed. So even though this card delta temperatures aren't stellar that is mostly due to the power draw discrepancy between the cards.

In the OC test with stock thermal paste the card started throttling at around 86C. This is not due the temperature limit which is at 90C for this card like very other RX 480 I've tested but due to the fact that higher temperatures cause higher power draw and at 86C core temperature that card was pulling well over the 165W power limit that an RX 480 with +50% power has. 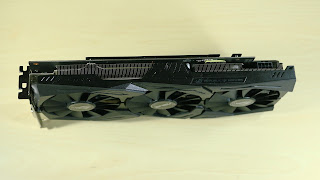 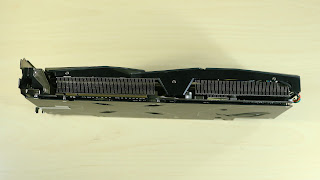 An important thing to note is that due to the way the STRIX's heatsink dumps hot air you will want to put some airflow in front of the card's fans or they will end up re-using air that already went through the heatsink which leads to sub optimal thermal performance. If you have good case airflow this should be none issue. If you're not sure I recommend that you try playing with fan placements a little. If you don't want to mess with airflow you'll have to live with the noise of higher fan speed because as far as I know most of the custom 480s have the same problem and the reference card is really really loud if you want get some real OCing done.


The STRIX heatsink is an obvious case of too many fins and too much airflow without enough heat transfer from the core as increasing the fan speed doesn't lead to a very significant drop in temperatures. I suspect this may have something to do with the ASUS direct contact heatpipe design as only 3 heatpipes get proper contact. I went on to try test this theory by attaching thermal probes to the heat pipes and at maximum fan speed there is a 5°C delta between the heat pipe with the most die contact and the outer most heatpipe.

It also worth noting the absolutely massive drop in temperatures going from the stock thermal paste(which judging by the lack of damage to the warranty stickers on the screws was not tampered with) to my current favorite paste Thermal Grizzly Kryonaut. So I highly recommend that you replace the thermal paste on your RX 480 STRIX if the heatsinks seems to under performing. An 8°C temperature drop on RX 480 can make about a 10MHz difference in stable core clock. 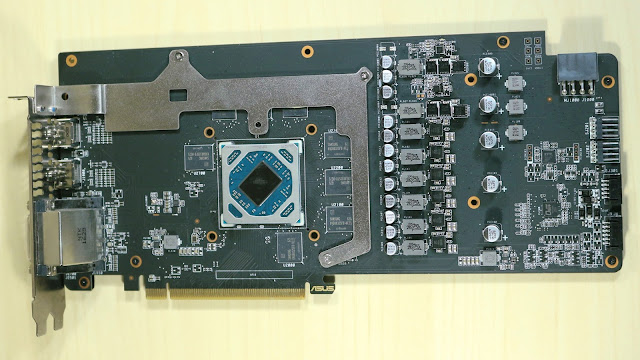 AUX
- 1 phase controlled by uP1541R
- 2 low side QM3056 MOSFETs
- 1 high side QM3054 MOSFET
- 40A, 1.5V @ 125°C assuming 500KHz switching frequency
- 67A, 1.5V @ 100°C assuming 500KHz switching frequency
The RX 480 STRIX ties with the GTR for most powerful Vcore VRM. The GTR achieves it's current rating by using IR Direct FETs. The STRIX with IR3555 PowIRPowerstages. The end result is the same. The VRM on both is ridiculous overkill for an RX 480 which even when pushed into the 1.4V range will only draw around 200A. So the STRIX's Vcore VRM is perfectly good for any kind of overclocking endeavor be that on the card's air cooler, a water cooler or LN2. The VRAM and AUX VRMs are both single phase designs which is the same as you would find on any other RX 480(at least as far as I'm aware). Both are capable of delivering 40A and such are of no concern in any kind of overclocking scenario.

Overclocking Tips
The STRIX is compatible with both the Elmor RX 480 Air BIOS and the Elmor RX 480 LN2 BIOS which makes really pushing the card a lot easier as both those BIOSs are signed to work with the AMD drivers and come with a 1.4V and 2V Vcore limit. Which is a significant improvement over the 1.3-1.35V limits that regular RX 480 BIOSs come with. The LN2 BIOS does not have GPU core temperature enabled so do not use it on cards unless you are using LN2.

The STRIX PCB comes with soldering points to mod Vcore Vmem and Vaux on the top edge of the PCB. Vcore control is well supported in software so I wouldn't bother with that one however Vmem and Vaux both lack software support so for those the solder points are very useful. The card does not however have a solder point for the 0.95V VRM so you will have to mod that one the usual way if you want to get rid of the black screens(the card is still running the benchmarks just not outputing to your monitor) that RX 480s get when on running benchmarks on LN2. 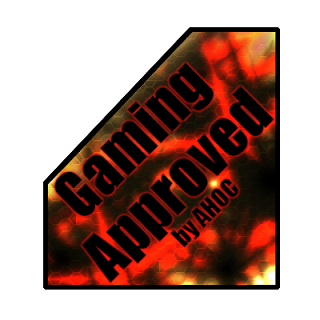 Once you replace the thermal paste the card has excellent cooling performance at low fan speeds and noise levels. The VRM quality is also far beyond what any gamer would ever need. So this is certainly a good choice if the card is to spend it's life in your daily system. 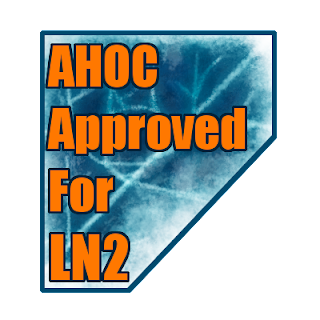 The VRM are far beyond what an RX 480 will ever need even on LN2 and as such the card is completely capable of smashing HW high scores sitting on a test bench with an LN2 pot where the heatsink would normally be. The volt mod points are especially a nice touch as they make modify the voltages without software support much easier. The only down side this card has is that it lacks dual BIOS functionality. Which is only really a problem if you intended to do a lot of BIOS modding which carries a high risk of flashing a BIOS that won't allow the card to boot.
Posted by Buildzoid at 7:10 PM 6 comments: