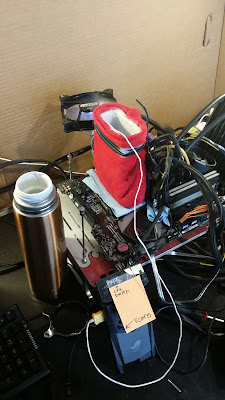 So I mentioned on the last livestream I might do a Fury X in 3Dmark Vantage for the ROG OC Showdown Team Edition. That plan got scrapped when Elkim the Alza OC team captain managed over 82000 points using a 7820X and a 1070. Since the best CPU I could use for vantage under the ROG OC Showdown rules was a 7700K I decided not to bother.

I still had prepped for LN2 Fury X so I decided to wrap it up in towels and take for a spin through some Firestrike and Unigine Heaven.

Except that didn't happen at all. First of all the Fury X has cold slow. So the card gets locked at 300MHz core clock the moment it goes bellow 0 core temp. Luckily I had a cold slow removal BIOS. So I copied some of the settings from it's power play table into my 1.3Vcore 1.42V HBM BIOS and fixed the cold slow situation. At the cost of temperature readings as well as idle clocks and software voltage control(I need to look into this some more).

Now that the card was stuck at max core clock instead of 300MHz I started doing some testing. 600 and 666MHz HBM clocks worked great for 3Dmark Firestrike. Though 600HBM works on all my cards with 1.36V. On the other 666HBM did need the cold so that worked well enough. Core clock on the other hand was a mess. First of all something on the card breaks when going bellow -50C. Not sure what it is but either way idling at -60 to -50C involved plenty of artifacting. Running benchmarks at those temperatures met an instant crash regardless of core clock. Tweaking some of the secondary voltages on the card should fix this but I didn't have the mods for that on the card. Vcore was stuck at 1.3V because the cold slow fix broke software voltage control. At the time I didn't feel like adding more Vcore through the GPU's BIOS so I got stuck at 1205 core at around -45C and 1.3V. With clocks barely better than what the card did on it's stock AIO I didn't bother to save scores from firestrike and instead decided to try Unigine Heaven. Which went worse.... 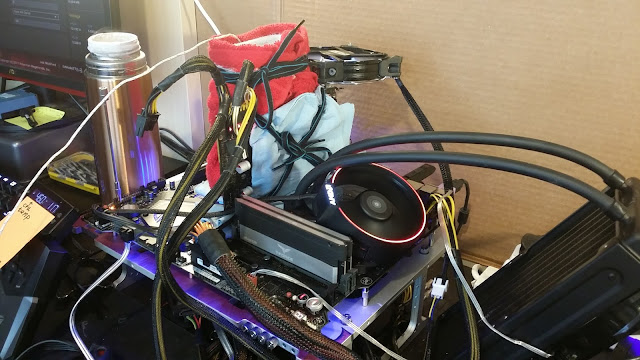 I spent some more time trying to get higher core or HBM clock to work in Heaven or 3Dmark but the card simply wasn't having any of that. 1.35V core was less stable than 1.3V at best. 1.45V HBM was equally useless. 1.4V HBM wasn't any better. So 1.3V core with 1.42V was evidently the best for this card without tweaking the minor rails that require hard mods. Unfortunately stability deteriorated further through out the session eventually I was just getting completely random crashes and errors that all seemed to be driver or memory related and I decided that I probably had a water problem.

I did. Pulling the still cold card revealed a soaked PCI-e slot and gold fingers. My attempt to dry them was a fail and I called it a day since evidently getting into windows was going to be borderline impossible without encountering a slew of random crashes. I just wish I had tried the higher Vcore BIOS on the session because it is entirely possible all my issues were due to all the water.

On the bright side the Fury X pulls basically no power at all when on LN2 so I didn't really use all that much LN2 to keep it at -45C. The whole system power draw peaked at only 470W and the card's VRM was perfectly happy relying for cold to travel to it through the PCB. 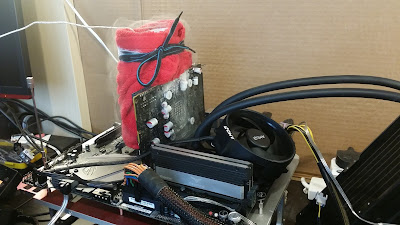 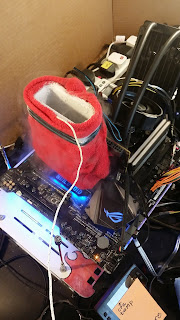 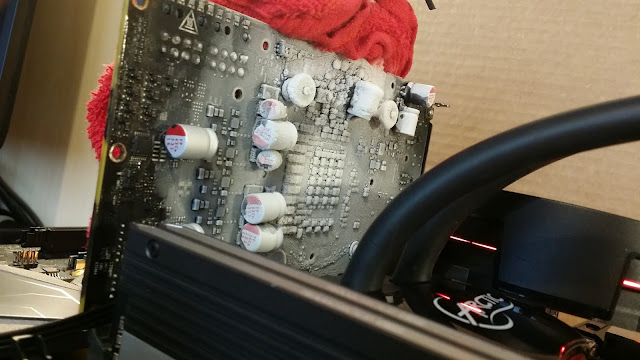 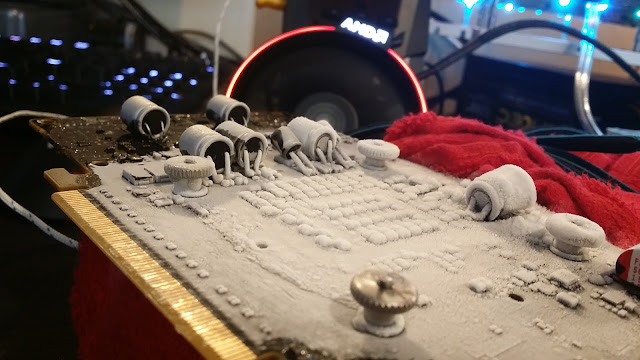 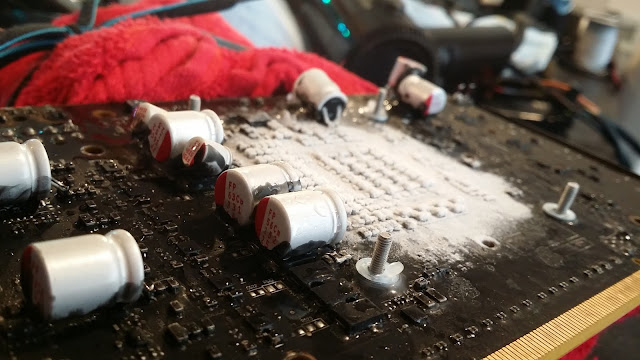 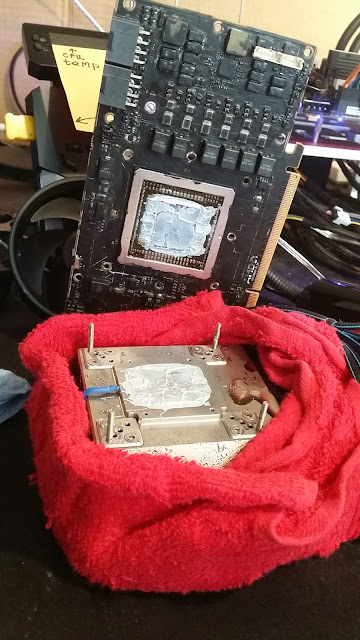 I used a truckload of Kryonaut during mounting just in case the card worked bellow -90C. Hopefully next time I take the card cold this will be necessary as I intend to have ALL THE MODs next time.
Posted by Buildzoid at 9:43 AM