First of all I did not expect this to actually do anything. I'm fully aware that the bypass capacitors on the back of a CPU are selected for filtering the very high frequency switching noise that a CPU running at several GHz produces. The capacitors I went with are definitely not capable of doing that. However it's not like adding around 1000uF to the back of a CPU is going to make it clock worse and so motivated by boredom and the fact that a CPU with some massive caps is gonna look ridiculous I proceeded with the operation.

First up I wanted to get an idea of how hard soldering to a CPU would be. 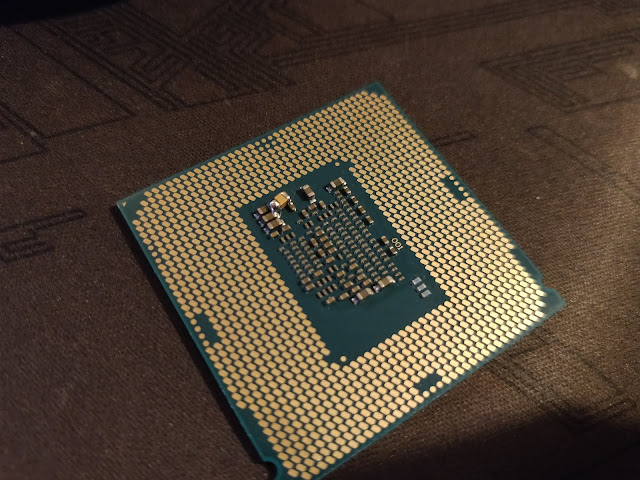 CPU: i3 7350K
Status: dead
Cause of death: PCB got crunched by prototype cooling system

So that extra cap right there still allows the CPU to fit into a socket just fine. One of the main issues with cap modding CPUs is that it's really hard to tell what caps are Vcore and which ones are say VCCGT/VCCSA/VCCIO. The best way to do that is to install the CPU in a motherboard(has to have IHS and socket locked down other wise the contact sucks) and then measure the resistance from Vcore to GND on the mobo. This i3 7350K has around 2.9ohms of resistance from Vcore to ground. Once you take the CPU out you just have to check which caps have the same resistance across them.
Anyway lets move on to the real victim. 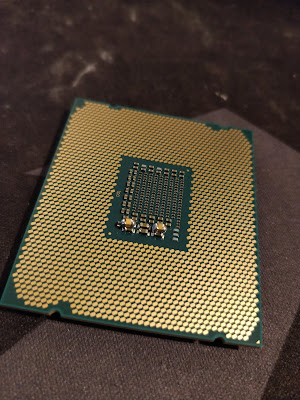 And here is the real victim. Stock Vcore to GND resistance on it is about 0.6ohms. Before I started with all this modding this chip would do 5.454GHz cinebench R15 at 1.45V. It's also very temperature sensitive as even with 1.53V it still doesn't do 5.5GHz in CB R15. The caps added were 2 47uF 4V X6S ceramics. They seem to have maybe helped the CPU clock about 10MHz maybe. Wasn't really that hard to get them on. Originally I tried to have them sit on the CPU substrate but that didn't clear the CPU socket cut out. Surprisingly enough the socket is deep enough for me to stack them like this.

Once I realized just how deep the center of the LGA 2066 socket is I figured I could probably fit some 2917 polymers over the field of very little MLCCs on the back of the CPU. 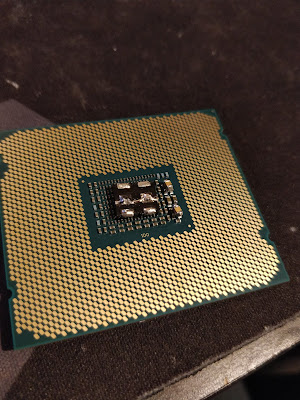 Yeah looks like I definitely could fit them. Only issue is that polymer caps are polarized and the MLCCs on the back of the CPU aren't. So I need to figure out what side of one of the Vcore MLCCs was GND/Vcore. The only way to do that would be to measure the voltage / resistance from the cap pad to GND/Vcore on a motherboard. In order to do that the CPU would need to be installed in a mobo...... 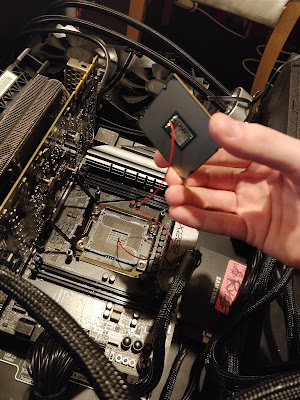 The X299 OC Formula has a pretty large hole in the center of the CPU socket meant for temperature probes when benching on LN2. So I ran a wire from one of the caps on the back of the CPU and through the board to get my measurements. 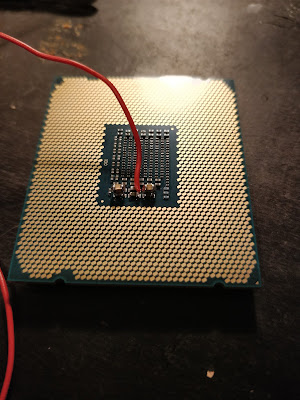 And the pad I had the wire attached to was Vcore. 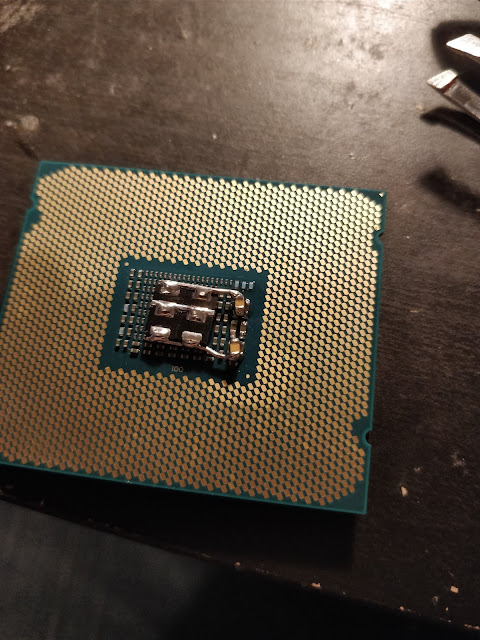 And here we have the end result of my boredom. It still fits in the socket on the X299 OC Formula. It still runs. It still does like 5.465GHz. I know I said that earlier the CPU did only 5.45GHz. But honestly I'd say the variance in temperature of the room I was testing in probably made that 15MHz difference rather than the 2 470uF Panasonic polymers and the 2 47uF MLCCs. I went on to mess around with the chip some more and it kinda tends to take longer to crash at higher clocks than before but again were talking like 5.47GHz at most and what I'd consider margin of error differences. I'm probably biased towards saying this did something more so than admitting that it did absolutely nothing just due to the effort involved. In more practical testing this chip does boot and validate 5.65GHz at 1.6V on an AIO and will run cinebench R15 with HT turned off at 5.55GHz with l.55V. So it's pretty much perfect for some Unigine Heaven benching I plan to do soon. Might even do 5.6Ghz for that.

Posted by Buildzoid at 8:02 PM